Happy Review Monday! The weekly segment where I review anything and anything idol! If you want me to review something, put it in the comments below.

My review topic was suggested to me by a friend, and that’s 17sai by Moritaka Chisato. He didn’t specify song or PV so I decided to do both. Moritaka Chisato was a popular idol singer in the late 80s. The songs you guys might know are The Stress, which ended up being covered by Abe Natsumi as one of her solo singles, and Watarasebashi, which was covered by Matsuura Aya. Recently Kikkawa You covered Moritaka Chisato’s version of 17sai, which is in itself a cover of the original by Minami Saori.

Also, for you MomoClo fans, the girls did photosets of some classic idols, and Shiori dressed as Moritaka. 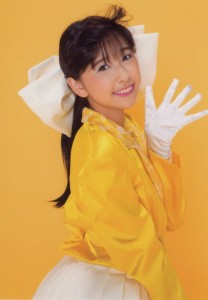 Song: First off, I think I should mention that this is a cover, and I think an effective one. The original song featured strings and sounded much more like a traditional idol song. This takes said traditional song, gives it some funk and disco flavor,  updating it to the late 80s when this cover was released. It honestly reminds me a bit of what Morning Musume is doing right now, in updating their songs, though I like this update a lot more than the Morning Musume ones. It makes me wonder if fans of the original were disappointed by the choice to update this song. I really like the original 17sai, but this feels like an update that makes sense.

I like this song a lot, even for being more than a bit dated. It has a really good funky sound that, at the start, reminds me of Funkytown. Then it uses these instruments to do a nice song. I don’t think it’ll ever be one of my all-time songs, but I love the instrumental and song itself. That said, it is very dated. Whereas some idol songs stand the test of time, this feels like a product of its time in terms of the instrumentation. Not necessarily a bad thing, but it doesn’t hold up as well as some other songs.

Chisato’s voice isn’t the best idol voice ever, but it’s certainly pleasant to listen to. My only major complaint about the song is the instrumental break in the middle goes on a little too long for my liking, but I wonder if part of that is also a product of its era.

Still, even though it hasn’t lasted the test of time as well as some other songs, 17sai is quite good, and is worth a listen if you want some idol history.

PV: This just shows you how far PVs have come in the years. This is basically Chisato dancing and close-ups in front of a white background.

At first I was wondering if this is just what PVs were like and if this was one of her first. But then I remembered that she put out The Stress right before 17sai, and there’s certainly a lot more going on in The Stress’ PV.

But really, I don’t mind that not much goes on in the PV. Chisato’s outfit’s fun, I like her as an idol, there’s some dancing. The biggest thing I don’t get are the effects; they’re not great effects, but they just make images more choppy and hard to see. It makes me wonder if they add anything to the PV, and if it would have been better had they left them out. I suppose it would be not that interesting without these effects, but there’s the problem.

Either way, both the song and the PV are an  excellent time capsule, showing what idols were like years ago.