This week, I was unsure of what to review. So I asked my Facebook feed what I should do. (By the way, if you want to see me review something, leave a comment). There were a few good recommendations I’ll get to in the coming weeks, but Chiima of Okay! Musume Time asked for Team Syachihoko’s Ai no Chikyuu Sai. I’m a complete sucker for Team Syachihoko, so Syachi review it is!

Just a small note that I do adore Team Syachihoko, they’re my favorite idol group, so there is some bias there.

Song: This is certainly different. After last single’s loud and bold ‘Shuto Iten Keikaku,’ written by Japanese hip-hop artist SEAMO, in which Team Syachihoko declares their intent to change the Japanese capitol to Nagoya, this is tame and laidback in comparison. I’d imagine for most people it takes a couple of listens to get into this song. At first I didn’t know if I liked it, but after multiple listens/views of the PV, I adore it.

The thing is, this is definitely not as impactful as The Stardust Bowling, Koibito wa Sniper or Otome Juken Sensou. This is slower and laidback, even when the song speeds up for the chorus. But, in a way, I’m really happy this is the type of song Team Syachihoko chose to put out so relatively early in their careers. It shows that they aren’t just typecast into high energy songs like the ones I mentioned, but can do these easy-going songs.

This doesn’t mean that the song goes along at a snail’s pace; there’s a good tempo for it, and I really like the instrumentation (electronic/dubstep-influenced and all). It’s just not quite as energetic as Syachi’s other efforts.

One thing I find interesting is that this song was written by some pretty big names in the music industry. The song was written and arranged by Komorita Minoru who, in addition to a solo career, has written for a lot of artists. Notably for me he wrote a few songs for Matsuura Aya later in her career, Happy to Go and Blue Bird (from Double Rainbow, my favorite Hello!Project album ever), and Charisma Kirei for Melon Kinenbi. So, knowing these songs that he’s written, this type of mellow but upbeat song makes sense. The lyrics were written by Miyashita Kouji, who, amazingly, wrote everything to Maru Maru Mori Mori. Since this was such a huge song, I’m impressed that Syachi got him to write their lyrics.

All in all, I can see that people might not get this song. I didn’t get it at first. However, it really grows on you and becomes a song that you like despite not expecting it.

PV: If the song’s different, the PV is definitely different. The whole theme of the PV is television (which is in and of itself pretty weird, given that the rest of the song is about the Earth). To illustrate this PV, I think I’m going to have to illustrate with some screencaps (Sorry Chiima if this is too much of your territory XD) 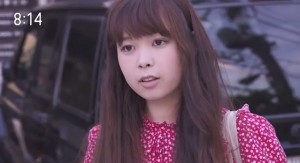 First off, we start with a girl who appears to be in some sort of drama, talking to a guy. I have no idea who she is, but we quickly switch to the main PV and never see her again. Uh, OK. I guess this is Syachi taking over the airwaves because soon we get… 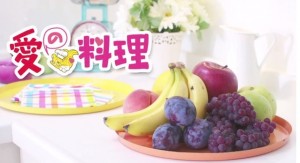 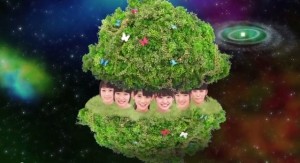 I’m guessing the justification is that this is now a Syachihoko centric world, where Syachi is at the base of everything. Which we’ll see later. But this image of a tree made of Syachi floating in space is just… strange. 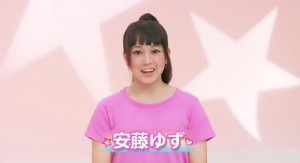 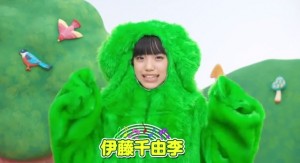 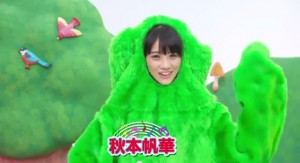 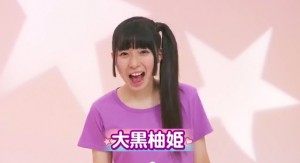 Basically all of Team Syachihoko are appearing on shows basically just featuring them. 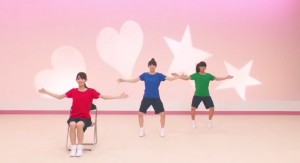 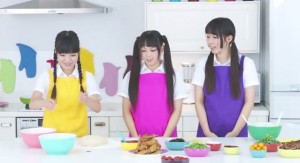 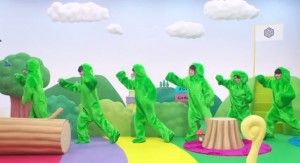 And a show that’s basically them as frolicking monsters. A local concert venue I go to see bands at (mostly indie type bands) shows stuff on screens before the event, sometimes, and one time I went there was a Japanese show like this; basically people in monster suits running around a forest. So even if this seems strange, this does have precedent.

As for this so far, I really like it. It’s colorful, fun, but still seems simple. It’s not overbearing in its wackiness, it just seems to be perfectly content with being colorful and fun.

However, as soon as you think “oh this is pretty normal, Syachi starts throwing stuff at you. 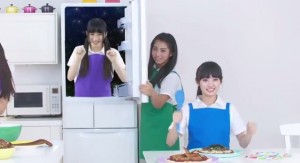 Yep, Yuzuki’s hanging out in a space fridge. A side note, but I wonder why Stardust groups tend to put my oshimen in the fridge? 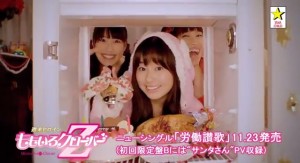 But this is just the start as things get progressively weirder and more and more copies of the Syachi members start appearing and they dance. 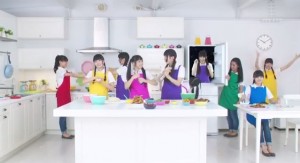 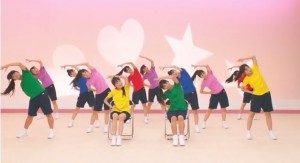 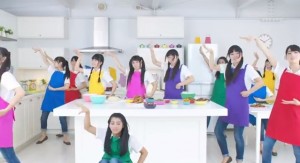 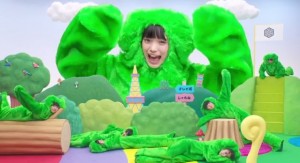 More copies come in near the end of the song when the song increases pace. And then none of it’s explained, but does it really need to be?

If you have an aversion to weird PVs, this is probably not your cup of tea.  But personally, I really like their take on the various TV genres, and I think it’s another really solid addition to the other two PVs that Syachi has. It may not have the initial weirdness of The Stardust Bowling or the cool factor of Shuto Iten Keikaku, but this is a fine PV and song and I’m one I’m glad Stardust chose to do.

Leave a Reply to how to defend yourself Cancel reply