C-ute is a group I’ve followed occasionally, and I’ve even bought some Maimi goods, but I don’t know if I would consider myself a big fan of theirs. Nothing wrong with C-ute, mind you, but I really don’t pay attention to them as much as other groups. However, their career has had a really interesting trajectory. Starting off as the ‘leftover group’ from the H!P Kids, C-ute has grown to surpass the original H!P Kids group Berryz Koubou, and has lately gotten even more recognition. They’ve gone from a group that did Ooki na Ai de Motenashite to a group that does more adult things like Crazy Kanzen na Otona. So how does their new single hold up?

Song: This song had to grow on me. I definitely liked it at first, but it’s not immediately catchy. The best word I can use to describe this song is pleasant. There isn’t anything immediately interesting about the song or anything mind-blowing about it, but I do like the song. The chorus is a lot more interesting than the verses (especially the repeated “Why Not” sections), but the verses grew on me too.

My biggest complaint is the arrangement. It’s a nice sounding instrumental track, but the electronic backing doesn’t fit as well. If they had used real instruments (I’m thinking this would be brass heavy, but would have some piano and strings in there), the song would sound a lot nicer. This isn’t an electronic song like some of Morning Musume’s latest fare; those songs make sense to have mostly electronic stuff going on. This is not the same type of song, and the instrumental is just disappointing. I like the melody and song enough that that would make this transcend from being just good to really great.

The lyrics are nice; Tsunku isn’t a master lyricist or anything but they aren’t bad. The only thing that made me pause was the line about being chubby. Um, no one in C-ute is even remotely chubby.

Nice and pleasant are the ultimate words I will use in reference to this song. I like it a lot better than some of the recent stuff C-ute has done, but it’s not going to be on my top song list of the year or anything.

PV: PVs are not H!P’s forte. It’s gotten to the point where, if H!P has a PV that’s even remotely good or interesting, I’ll be excited and happy for them. I have to think this is where this PV stands. If you are comparing it to all idol groups, it’s not the most interesting of PVs. However, compared to H!P, this is wonderful. 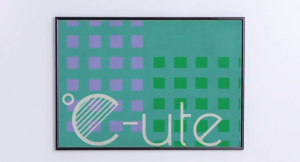 The biggest thing I admire about this PV is its unified aesthetic choice. It’s doing this style which feels unique and fresh, but also appealing. This goes a long way for turning a PV from boring and average to being interesting. 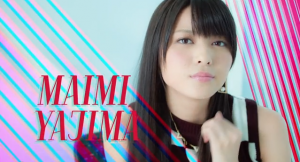 The best part are the member introductions at the beginning. They’re designed well, all the girls look nice, and it has a really dynamic feel to it. I think a good part of that is because the girls move into the still shots of them, instead of just featuring the still shots. There’s a lot of motion in this PV, which I always like. 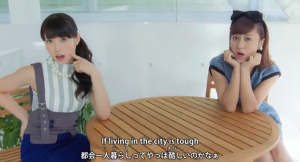 One of the things that’s hard to show in the screencaps is that there is a fairly long, single take shot on what looks to be a handheld camera (or at least not a steadycam shot). It’s very fluid, moving between the girls in a way that I don’t always see from H!P PVs. It adds a lot to the PV and is something I appreciate. 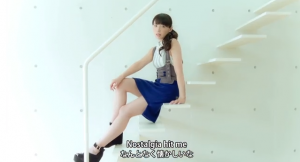 Another thing I like is the set. I’m not sure where it is or if H!P built it, but the white serves a nice contrast to the girls, and all the stairs, mirrors and windows make for a much more interesting set than we’re used to. 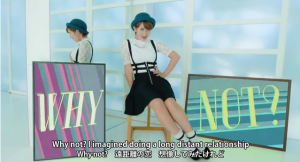 The effects add a nice burst of color to the plain white surroundings, and make it look interesting. Yet the effects never look tacky or just plain awful. They add a lot to making the PV look great.

The dance shot is the worst part of the PV, by far. While C-ute does well with dancing, like always, I just don’t get some of the choices made. Could they have chosen a more boring place for their dance shot? Even if they rented this place out, surely they could have picked a better pace than a boring white wall. It just doesn’t fit with the reset of the great set. 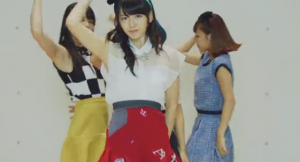 To this Airi. Notice anything? The answer is the lighting changed! Most of the PV has nice lighting. H!P PVs often have iffy lighting at best, so I was really excited to see how good the lighting looked until I saw the dance shot. Everything looks so drab, dark and flat in the dance shot that not even the visual effects can brighten it up. I would have probably not cared that much with this lighting had the rest of the PV not been lit well. Worse than being bad, it’s inconsistent.

Overall, Tokai no Hitorigurashi is a solid song/PV from C-ute. It has its share of issues, but is more than passable and even steps things up from an average Hello!Project release.

Song: This has the opposite issue to me than Tokai no Hitorigurashi; the chorus here isn’t what works. Up until the chorus I really enjoy this song a lot. It’s a cool song with a bit of a darker tone and utilizes some deeper vocals than I’m used to with C-ute. The instrumental sounds fitting and I don’t wish for a different arrangement like I do with Tokai no Hitorigurashi. However, everything I like about the song disappears with the chorus. It’s not a bad chorus, per say, but it has a very different feeling. The verses have a lot of oomph to them, for lack of a better term. The chorus sounds a lot happier and lighter, which feels wrong with the rest of the song.

The arrangement also falls flat in the chorus in that it feels empty. There’s a lot going on in the rest of the song, but it feels like most of that drops out for the substandard chorus.

I really like the heavy, dark feel of the song, and if the chorus could harness more of that I would be totally on board. However, the chorus alone keeps me from really feeling like this is an outstanding song. Which is a shame. 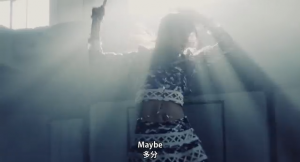 I love it. Seriously, H!P, keep this lighting designer please. This isn’t inconsistent, but just good. It plays a lot with light and shadow, all the while making sure that all the girls look good. 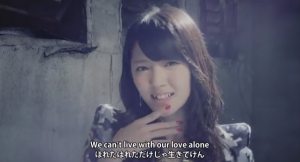 Occasionally the girls are slightly overlit (one of my H!P PV pet peeves) BUT this is almost always a temporary thing and done for effect. But seriously, H!P, this is how you light a PV. This PV always looks gorgeous and visually interesting, even though it’s mostly just close-ups and dance shots. Despite the simplicity, the basic elements are done well, which means that I’ll want to watch this over most H!P PVs. 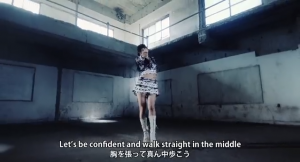 Location wise… Dirty, falling apart warehouse? It’s not my first choice for a great PV location, but it this type of situation facilitated the lighting then I’m all for it. Plus it really goes well with the feel of most of the song. 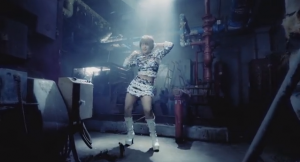 This PV also has a really nice sense of movement to it. The camera is rarely stationary, moving well with the C-ute members and aiding in the transitions. This makes for another fluid PV that doesn’t feel choppy. The best part is again at the beginning and whenever the girls do solo dances. The camera work and the editing work well together. 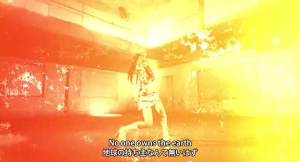 The worst part of the PV are the cheap filters that are put on things. It doesn’t happen often enough that it feels like a proper part to the PV, like the effects in Tokai no Hitorigurashi. It just looks cheap and unnecessary.

The other negative is that it is a fairly simple PV. It’s comprised of the group dance shots, solo dance shots, solo closeups and some brief group closeups. I know that I said it’s done well enough that it makes it better, which is true. I love the lighting in this enough to make this one of my favorite C-ute PVs. However, just a bit more would make this PV really special.

Overall: Much like Tokai no Hitorigurashi, a few shortcomings make Ai tte Motto Zanshin fall a bit short of its potential. A lot of good things are there in the song and PV, but the issues keep it from being as good it can be.

This is a solid C-ute single and a solid H!P single. There are a lot of things I like, but enough frustrating things that make me wish that it had been done just a bit better.