I was wondering what to do with the Review Monday segment this week, when I saw the PV release for Momoiro Clover Z’s single “GOUNN.” Since this is actually the first single from MomoClo this year, it’s a very highly anticipated single and music video that’s been hyped up for quite some time.

The Song: I’ve made it no secret that Momoiro Clover’s music has had its ups and downs for me. While a lot of their older music is some of my favorite idol music, their current music has been a mixed bag for me. However, this is the strongest MomoClo has been musically in a while, aside from some of the better tracks on 5th Dimension.

The song itself is quite good, and memorable. The song was written by Shihori, a Japanese singer songwriter who I do not believe has written for any idol acts. I have to believe that, after GOUNN, idol acts are going to be knocking on her door, because this is wonderful. I don’t know if I fully appreciated the song during my first listen, but it is an earworm after a good few listens. The girls in Momoiro Clover Z sound great, too, and while a large part of that is undoubtedly due to practice and good vocal direction, the song fits their vocals well. Kanako in particular sounds really nice, especially for being a fairly weak singer. For this single, MomoClo were going for a “Buddhism” theme (something I’ll delve into a bit later), and while it would be easy to go full stereotype, Shihori gets a bit of that kind of flavor into the song without making it sound like it’s from a bad stereotype of Indian people.

Probably my biggest rant about Momoiro Clover Z was my reaction to Otome Sensou. It was the first MomoClo single I genuinely did not like, and while parts of that song have since grown on me, I still have a lot of complaints. One of these complaints is that the arrangement was weak. This song completely avoids that. The instrumentation is lush and full, fitting the song, but never really feeling busy. The slow moments, featuring piano, are lovely, and I love pretty much all the bass lines thrown in there. There’s a bit that sounds like an electric sitar, but don’t hold me to that. But it sounds really nice, and fits with the song without making it sound stereotype-y.

Most importantly, the song just works. There are wonderful individual elements, but they all work nicely together. Otome Sensou is a song where I can see how I would want to change the song. While there are other songs I like better this year, this is the best GOUNN that they could possibly make. So I’m very happy for MomoClo. 8/10.

PV: OK, I’m going to get this out of the way, since I’ve been working on putting this in words for a while, and doing some research. I’m not quite sure how I feel about this PV, cultural sensitivity wise. First off, I’m going to have a disclaimer: I am not an expert in Buddhism, Hinduism, Shinto, or any religion that isn’t Judeo-Christian or Greek/Roman mythology. So I’m not making any conclusions about this PV. If anyone is particularly versed in Buddhism (particularly Mahayana, which is what is mostly practiced in Japan), Hinduism or Shinto, please feel free to comment.

That said, I did have initial misgivings, especially due to the costumes. Even if everything is completely accurate or is as close to accurate as possible, it is still taking aesthetics from popular belief systems that people do think should be handled with weight. The idea that this kind of aesthetic, taken from these religions/belief systems, is somehow used as MomoClo’s new PV aeshetic bothered me. I don’t practice these religions, and I know that Japan isn’t a very religious nation itself, but it’s an issue of respect. This is also added to the unfortunate fact that MomoClo doesn’t have the best track record for cultural sensitivity in their music videos.

That said, I am a bit confused with the religion portrayed in the PV. MomoClo has called it “Buddhism-themed,” which would make sense. Buddhism spread to Japan, and is one of the more significant religions in Japanese history. However, certain things made me suspect that this wasn’t as accurate to Buddhism as it could be. 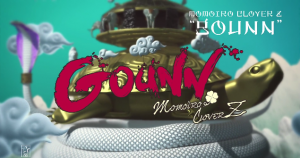 Buddhism is a system of beliefs that is sometimes debated on whether or not it’s a religion, primarily because worship of deities isn’t a major part of said religion. Enlightenment is the primary goal of Buddhism, not closeness to a god or gods. That said, worship of deities does occur in Mahayana Buddhism, which is what spread to Japan. I’ve been trying to look up who each member was supposed to be. I believe Kanako is approximating the Medicine Buddha, but I’m not sure. 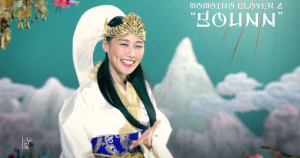 The costumes are the last thing that make me wait and consider. They look to be more approximations of Shinto goddesses rather than anything else. Which adds to the whole giant mixed  up PV this is.

Like I said earlier, I don’t want to make any conclusions. I don’t think MomoClo are trying to do something bad, and I’m not even sure if I think this is all that bad. BUT It does make me sit up and wonder. If you or someone you know is an expert in this field, I’d like to hear from you.

All of that aside, I really like this PV a lot. 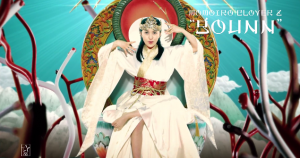 THIS is how you do a highly visual effects driven PV. None of the effects look cheap or goofy at all; instead, they work to create a very visually pleasing PV that looks incredible. MomoClo has all been lit well and shot well, so the effects work well to create a visually stunning PV. This is possibly the best looking PV that I’ve ever seen done primarily using visual effects.

The sections where it’s just MomoClo in these circles, adding to visual patterns. It looks great, and is a bit of a gutsy move, just based on being able to show very small pictures of the girls to go along with the visuals. 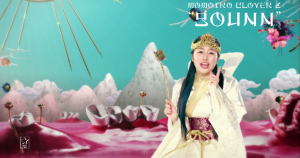 Some people may be taken aback by how unusual this PV is, which is a big part of why I want to figure out more of the religious backing to the PV. For example, Ayaka here is sitting on a tongue, surrounded by teeth, holding a toothbrush. Kanako is holding a syringe and surrounded by blood. Reni is sitting on and surrounded by hair. The PV is so beautiful, though, that it’s hard to catch until someone goes “oh my god that’s teeth in the background” (which is admittedly what happened to me, when someone pointed that in a Facebook group I frequent).

The editing, while good, isn’t perfect. There are points where it feels too fast and frantic; more than once it edits exactly on the sung syllables (when Ayaka sings “ka-ru-ma,” there’s an edit on each one of those syllables). However, this is a small complaint. I do wish that the girls were doing a bit more. They take part in the dance shot, they appear in the visuals I showed above, but for the most part they’re just sitting in their location. This is fine, and I’d imagine things were limited by the visual effects. However, that is a bit of a disappointment.

Ultimately, though, this is a visually stunning PV, and while I was taken aback by some of the PV’s content, that doesn’t change that this a well put together PV. 8/10.