Last week I reviewed the title track and main B-Side to the latest AKB single. Now it’s time to take a look at the other tracks, the individual group ones!

Song: This title makes me NERVOUS. Since AKB48’s first song they ever performed was “Party ga Hajimaru yo,” the idea of doing a song talking about the party ending immediately makes me a bit anxious.

Still, if this song is indication of the party that’s ending, it’s a party that I’m glad is over. This is not a very good song. I’m hardly a big fan of a lot of slow songs, but I do like a good ballad if there’s emotion to it. This is slow, emotionless, and drags on far longer than it should. The instrumentation is quite nice, and I wish that there could be a more interesting song for this type of instrumental, but there isn’t.

I feel like the biggest tragedy here is the intro of the song; it sounds really cool, like it would be an interesting idol song… then nope, you’ve got Party is Over. I even had hope for the song once it changed styles, but then the verse went on too long and with an uninteresting melody. Again, there’s potential in the arrangement and instrumentation, but this song is the definition of dragging.

The chorus is better, and hints at a more interesting song, but that’s the one part that goes far too quickly. There’s also an out of place dubstep break which is OK on its own, but baffling here.

Like always, AKB48 songs are polished and this is no exception. There are elements here that, used in a better song, would be fine. This is just not that good of a song. Add to that that this is really not my type of song, and I can’t see myself listening to this for fun. Ever. 3/10

PV: Despite my feelings about this song, the PV is quite nice. It’s not really a PV based on a story, but it’s well shot and generally fits the tone of the song. 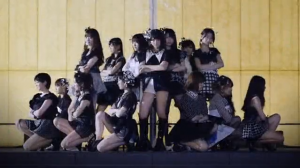 The dance shots look great. They aren’t silhouettes but the dark outfits and the light background make a very striking appearance which adds a whole lot to the PV. It’s overall a really nice looking dance shot. 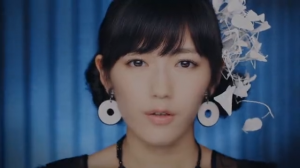 I know I’ve railed against flat lighting before here but, H!P, this is how you do flat lighting. It’s used to create a somber mood that fits the song, but it also looks  good. It feels like it was intentionally shot this way, to give it that mood. The background does a lot to make it look interesting, too. So I don’t necessarily hate flat lighting  techniques, because when it’s done well and with a purpose it can be really nice. It’s just not always used well. 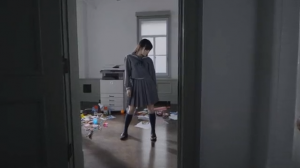 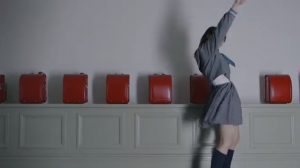 The whole PV was shot very nicely in terms of framing. I like the use of the set/props as well as how they never seem to be afraid to use asymmetry in a shot. Too often most PVs center the idol, whereas this one tended to have some interesting shots. There’s only one shot I really thought was particularly poor, and that’s this shot of Kawaei Rina. 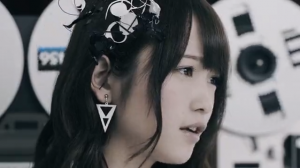 The only thing that baffles me is the editing; at some points it feels like they’re just trying to fit in all these shots. There are some weird cuts, it goes a bit too fast for the song at times, and there are occasional fade in/fade out transitions that don’t really make much sense.

Overall, though, this is a really lovely PV that just happened to be put with a less than lovely song. 7/10

I tweeted about this which got featured on Idolminded, but I’ll say it again. I am still disappointed that this isn’t a cover of the Pina Colada song.

Song:  This is another cool, electronic song, which fits my image of SKE48 well, especially since they use to make a dance-heavy PV, which is nice.

This is the type of song where, in a different year, I  might find interesting and refreshing. However, in a year where both Kamonegix and Mosh & Dive exist, this is not quite as impressive.

I like the arrangement with keyboard/piano in there, but for the most part it’s not quite as good as it could be. I feel like it could use more bass or a heavier drum beat in back of the higher pitched stuff.

The melody is fine, but a bit basic; in the chorus it mostly rests on one note. It’s not terrible, but it’s not memorable or particularly interesting.

Nitpicking aside, this is a fun track that fits SKE48 very well. I’m just not as enthralled as I could be, given what the 48 groups have put out this past year. The use of the piano ina cool song like this stands out, and I like this song,  but it’s not extraordinary. 6/10

PV: Escape feels like a completely different PV to, say, Party is Over. Here the entire focus is on the dance shot. There are very few shots that don’t involve dancing. And it works. The song is tailored to be more of a dance track, and this is what people are generally going to be interested in, so I’m inclined to be OK with it. 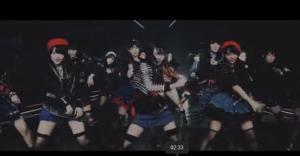 Overall, the dance shot is shot well and edited well. I do think the lighting is a bit too dark and could use more contrast to avoid being just dark, but it felt like they were going for that with the PV. There are sections where there are more lights, so they do play around with it some, but the lighting doesn’t play up any chiaroscuro/exaggerated shadow type things. Which is a bit disappointing, honestly. 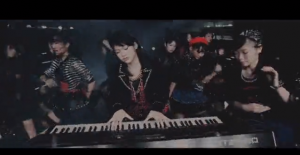 The shots with the keyboard were pretty fun, and basically the only thing breaking up the dancing.

Overall, it’s hard to say too much about this PV because it’s basic. It’s essentially there to service the song and the dance, which it does, but  it’s hardly a remarkable PV by any stretch of the imagination. 6/10