Back to our regular schedule this week! There’s still one more end of 2013 list coming up (PVs) but that’s going to be in one of the next couple of List Fridays.

Today I’m going to review the last two 48 group tracks from AKB48’s Suzukake Nanchara single. Because I don’t want to leave that undone.

Song: Something about this reminds me of an anime opening. I don’t know if it’s a specific opening or just a generic anime opening feel, but the melody plus the string-heavy arrangement gives me some serious anime opening/ending vibes. This isn’t a bad thing; I mean, that’s part of how I got interested in Japanese music, was through liking the opening/ending themes back when anime was still a thing I followed.

As such, the melody does feel like a mix of generic and unique; the song as written is something I know I’ve heard before, but not necessarily with a lot of idols, and at least not with a lot of idols recently. It’s not bad, but it’s not the most memorable thing ever. I enjoy it, though, and it makes me feel oddly nostalgic.

The arrangement fits well into this, with very strings-heavy instrumentation with some piano thrown in there. It’s very pleasant, and feels like it fits the song nicely, but it’s hard not to compare it to something like Bokura no Eureka, NMB’s other major string-heavy song of the year. Perhaps this is unfair; these are two entirely different songs. This is just where my mind went, though. The arrangement fits the song well, though.

All in all, this is a really pleasant song. It’s not quite as exciting as last year’s “Ha!” but it’s an easy to like song. 7/10 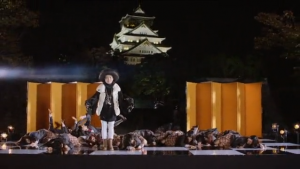 A gag at the end; now that’s something that feels like NMB.

This PV is essentially NMB48’s travel brochure to go visit Osaka. Which I actually really like. The other 48 PVs have been fine so far, but don’t necessarily feel like they are inherently meant for their group. SKE is generally a cooler group with emphasis on dancing and choreography, and they got that, but it’s still not the same. NMB48 has always had a pretty solid focus on being an group from Osaka, and this feels like their love letter to the city. 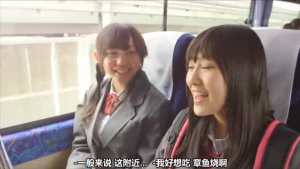 The conceit of the PV is that the group is on a school trip to Osaka and are visiting locations. It’s not really necessary; all the shots in Osaka should be enough. But it’s a nice touch to show why they’re running around Osaka. 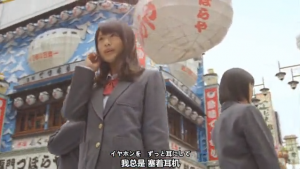 As usual the PV is shot very well, but pretty much all 48 PVs have a high production standard. I like these low angle shots throughout the PVs. It allows for some interesting looking shots that show off some of the Osaka scenery, but it also adds a fairly unique visual style to the PV. 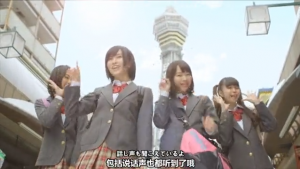 A lot of the PV is just walking around in Osaka, but it made me want to go visit the place, so I think they achieved what they were looking for. 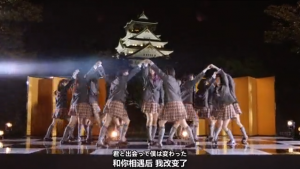 The dance shot is absolutely lovely, filmed in the evening in front of Osaka Castle. I know that filming an outdoor shot at night is risky, but this absolutely paid off. This is one of the best looking dance shot locations I’ve seen.

This PV is a whole lot of fun, shows off Osaka, and looks lovely. I think it’s easily the best PV of this single so far, and a very nice PV overall. 8/10

It’s hard not to compare this to Hatsukoi Butterfly, HKT’s song from last year. After all, that was HKT48’s first original song, and really set the pace for HKT48. Wink wa Sankai is unfortunately not as memorable as Hatsukoi Butterfuly.

I do like the guitar-heavy arrangement and rock-focused song; Melon Juice was a fantastic single, and I’m glad that they’ve continued with this motif at least for a while. The biggest problem is with the melody and the song itself. It just isn’t very memorable or interesting. The chorus part of “Wink wa Sankai” is fairly easy to remember, but I can’t bring myself to keep the rest of the song’s melody in my head. It would be one thing if the song was in any way interesting, but it’s not.

That said, I do like the chorus a fair amount. I’m a sucker for the response “yeah yeah yeah yeah” parts. And really, this isn’t bad, it’s just not as good as I wish it was. I love some of the electric guitar solos in here and the chorus is good. It’s just, when it comes down to it, the song as a whole isn’t as interesting or good as it should be from these parts. Which is a shame, to be honest. Melon Juice is one of the best 48 single songs of the year (after Koisuru Fortune Cookie and Bokura no Eureka), so if there was a little more of that I think this would have been better.

There are some good parts, but, as a whole, Wink wa Sankai isn’t as good as it should have been. 6/10 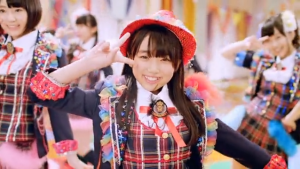 Nako, where have you been all my life. She is cute, charismatic, and I really enjoyed her as center. Meru’s fine, and I don’t dislike her, but Yabuki Nako has oodles of potential within HKT and I’m excited to see where she goes. 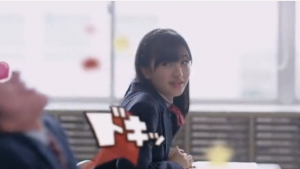 The conceit of this PV is that HKT48 discovers that their winks can cause the boys (and Sasshi?) at school to fall over and/or have heart attacks. Well. That’s something.

The comic book style graphics on the screen add a lot of character and personality to this PV; it’s kind of a necessary addition, mind you, otherwise the whole point of the PV would be kind of confusing, but it still looks nice and adds a lot of color. 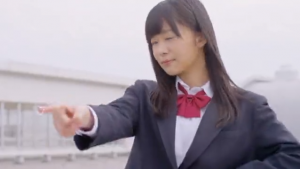 One thing I love is how far they take the silliness of this PV. The girls don’t just use it on boys they like; they use it in interesting ways and for their own personal gain. Sasshi becomes a wink sniper, hitting guys from a distance. They use it to win at table tennis and kendo. They aren’t being cutesy about it; they are using their cuteness as a straight up weapon. 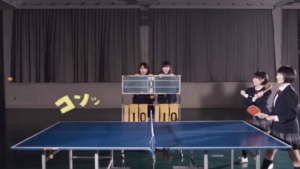 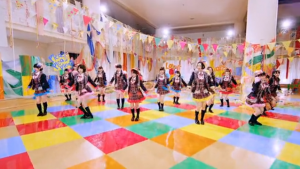 The dance shot is very Heavy Rotation-esque in how colorful it is. It’s not as fun as the rest of the PV, but that’s a tricky thing.

This PV is fun, has a lot of humor, and shows off its new center well. It has an interesting visual style on top of that. 9/10