This actually took some thought from me.


In the past my answer was always Yoshizawa Hitomi, since she’s good friends with my favorite idol, Ishikawa Rika, and if we were doing Hangry & Angry things that day I’d have to be very close to Rika, which would be super exciting for me.

However, despite how much I like Hangry & Angry, Yossy and Rika, the fact is that Yossy isn’t a very active idol nowadays. Sure, she’s been keeping herself busy with Dream Morning Musume, Hangry & Angry and other activities (one other reason I couldn’t be her; I am NOT running marathons). I wanted to find an active idol.


So after some deliberation (and the loveliest IM from my friend Dani, who compared me to Maeda Atsuko in a very positive manner), I chose… 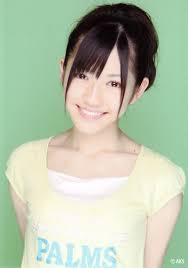 AKB48 Team B’s main front girl, Watanabe Mayu. Now I know that Kashiwagi Yuki has beaten Mayuyu in the senbatsu election. However, a this point in time it really feels like Mayu is still the definitive Team B girl, who sets the feel that Team B has. It’s like when Yuko beat Acchan in the senbatsu election; Acchan was still THE AKB48 girl, no matter what the election said.


I would want to be Mayuyu simply to feel how it would be to be a major idol player. These days the AKB48 girls are SO busy and are working almost daily. These girls work REALLY hard. And I think it would be really interesting to see just how hard it is to be one of these idols we love so much.


I could have chosen Acchan, Yuko or any other front girl for this purpose, but if I could be Mayu for a day then I could perform the Team B stage, which would allow me to perform Yuuki no Hammer, Inseki no Kakuritsu, Theater no Megami, Hatsukoi yo Konnichiwa and, most importantly, my beloved Team B Oshi. Mayu gets to be in the kickline for Mariyannu’s line, which would be amazing for me.


Plus, Mayuyu is really close friends with my favorite AKB48 girl, Oota Aika, so I could be like “Hey Aichan, let’s go have a sleepover” and we could hang out outside of work, and I could probably hug Lovetan, which is kind of my dream. Basically I’ll be whichever idol gets to hug Lovetan; though maybe not Sashiko.