I was absolutely excited to be informed that I was going to blog for the International Wota Summer Refreshment Program. I absolutely love the Intlwota site and not just because I’ve been getting plugged there lately. XD I’ve been checking the site and their chatroom, Wotachat, for much longer.

So, since I was excited, I decided to take this post and Happy Disco on a field trip; where to, might you ask?

The world-famous Mall of America.  (I know it’s world famous because I’ve seen enough Japanese tourists there). It’s just a train ride from my house, so I know it like the back of my hand.

Yeah, my local mall has a theme park INSIDE it. But I didn’t ride any rides today, because they’re expensive and I’ve been on them before.

I worked here for a summer. Doll Hair Stylist. So if you guys ever need an American Girl doll’s hair styled, I can do it for you.
For my summer refreshment item I went to my absolute favorite food place in the mall to get one of my favorite desserts ever; I went to Paciugo, a gelato chain. I like other places at the MoA; if you want to be into Japanese culture go to Tiger Sushi, which has really yummy stuff. Mmmm.

I ended up getting amarena black cherry, meringue, pannacotta and my absolute favorite flavor, Mediterranean sea salt caramel. Mmm. The gelato was a lovely and delicious treat and is definitely refreshing…
As are idols! (oh GOD, why did I think of this segway when I was at the mall??)

How I wrote most of my first draft; a journal and my Charmy Kitty pen. And yes, I bought a Charmy Kitty pen for exactly the reason you’re probably thinking right now.
Lately I’ve been working on a post about why I think AKB48 is so popular. This question has many answers (one of which is the focus of that post which will probably be up in a week or so), but one think that I think is valid in how they’ve maintained their popularity since River came out in late 2009 is their seasonal schedule.
I’m not going to judge anyone for what they listen to or how they listen to it; however, I know that when I listen to music on my iPod, I have very specific tastes that change with different times.
If I’m not being clear, let me explain. Earlier today I was mowing the lawn and doing yard work. When I was working, I put my AKB music on shuffle. Did I feel like listening to Tobenai Agehachou? I love the song, but no. How about Bird? Again, it’s a great song, but not fitting the mood. How about Ponytail to Shushu? Perfect.
People have been noticing AKB48 operates under an annual schedule for years now. Their first single, Sakura no Hanabiratachi was graduation themed, something that is a huge part of the spring-season for Japan. Two years later, Sakura no Hanabiratachi 2008 came out, and since then every year has had a spring/graduation single; 10nen Zakura, Sakura no Shiori, and this year’s Sakura no Ki ni Narou.

However, recently AKB48 has started adding more to this by having summer-themed songs. Now, this isn’t completely recent; I’d argue that both BINGO and Baby Baby Baby are pretty summery. They’re upbeat, happy (even if the Babyx3 PV has its fair share of weirdness), and are set either on a beach or at the pool. However, it seems like the newest tradition is directly about summer (and hair accessories?) with Ponytail to Shushu and Everyday, Kachuusha. Both have been released about the same time, right before we’re in the middle of summer, and are upbeat songs about summer and youth. It also helps that the PVs feature bikinis.

What I mentioned before about what songs I chose to listen to during the summer might just be me, but I really don’t think they are. A while back, at a meeting at work, we were all asked what our favorite summer song is, as kind of a fun question. I actually mentioned Everyday Kachuusha (even though no one else knew what that was), but nearly everyone picked pretty similar songs; happy, upbeat, feel-good songs.
Another example: I personally love holiday music (see my post about idol holiday music last year). However, even though I love it a LOT, I don’t want to listen to it right now in the dead of summer. I want idols singing about having fun and wearing bikinis. 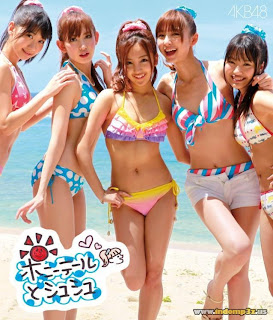 Again, I don’t want to speak for everyone here. But as a general rule, I think that people, especially casual listeners, will want to listen to happy, fun, upbeat songs as part of the summer experience. What I want to emphasize here is the casual fan. Of course the hardcore AKB48 wota isn’t going to care what type of song AKB releases in summer; if AKB48 were to go “Christmas in July, we’re going to dance around dressed as Santa!” it would probably end up selling a good deal of copies to hardcore fans. However, that’s probably not going to grab the casual listener, unless the casual listener likes that kind of silliness.
Getting casual radio listeners to go out and buy a single is probably one of the big ways an idol group can grow. Of course, they’re grateful to their hardcore fans. However, these summer songs could be something that would promote growth within AKB48. A casual listener might go “I like Ponytail to Shushu as a good summer song, I think I’ll buy that” and then when the next single comes out go “AKB48 did well last time, so I’ll pay attention to Heavy Rotation.”
At this point, though, AKB48’s growth is so huge that I’m going to point to a smaller example: the relatively new idol group from Avex, Super*Girls. At this point AKB48 is so in the public eye that the “AKB48 does Christmas in July” would in fact sell well. Even if they did Kwanzaa in July, people would go “Ok, I don’t know what that is, but it’s AKB48 so I’ll buy it. “

Super*Girls are not the biggest idol group in Japan by a long shot.Their first single, Ganbatte Seishun did pretty well, with about 13,500 singles sold. They had an album before that and even before that they did live performances. 13,000 is fairly respectable for a debut idol group. It’s not spectacular, but it’s not terrible.

Super*Girls’ new single, Max Otome Gokoro, ended up selling over twice as much as their first single, over 29,000 copies. They didn’t beat Morning Musume but came pretty close. Now, I’m not going to say that the only reason that the song did so well is the summer-theme, but that has to be part of the reason. I mean, that level of growth has to come from somewhere, and I have to think that having a summer-themed song and PV is part of it. I know that I didn’t really pay that much attention to the group before this single, and I know that I love it.
Conversely, I have to do a bit of criticism of my own favorite group, Momoiro Clover. I’m not going to blame the girls at all. However, when Ikuze Kaitou Shoujo came out, there was a pretty big buzz surrounding the group. It then ended up taking the group about five months to put out a new single, but they had had the preview for the B-side, Coco*Natsu, out for a while.
Despite the group having some buzz in the idol community, there was very little growth in popularity. Again, there’s probably a dozen reasons why this happened, so many so that it can’t be pinned on just one thing. However, I’d argue that maybe part of it was because Pinky Jones ended up being the A-side, Coco*Natsu was the B-side, and it ended up being released in November. I wonder if there would be some growth if Coco*Natsu was the promoted A-Side and it was released back in July? There’s no way of knowing, but I think there’s a good shot.
The same week that Max Otome Gokoro was released, Morning Musume released their latest single, Only You. I’m sure if you follow Morning Musume you know that their sales have gone down considerably. However, Only You was pretty low as far as sales go, dropping even further. They still ended up beating out Super*Girls in terms of sales; however, I’d go so far as to say that Super*Girls “won” because of their considerable growth as a group, in contrast to Morning Musume’s decline.
A lot of things are thrown around about why Morning Musume’s sales are declining, which is especially pertinent because of the current idol boom Japan is facing right now. Japan loves idols. However, I also wonder what Morning Musume’s single would have done if it was happy, summery and had bikinis in it. I mean, I still listen to Morning Musume, and I follow the group mainly for Erina and Aika. However, if I had to pick one song only I’d for sure go with Max Otome Gokoro.
Take from this what you will, and it’s certainly not a be-all end-all thing for sales. However, I know what I like to listen to in the summer; happy, upbeat, summer-themed music, and I think a lot of people feel the same way. 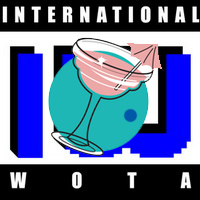 1 thought on “~Summer~ Time to be Refreshed by Idols!”