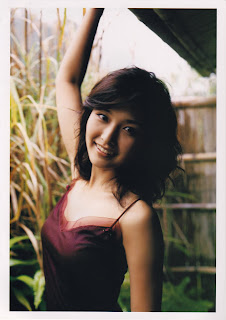 With this challenge, I initially really wanted to highlight different idols that I like a lot. However, this question has one really big answer with me, and that’s my #1 favorite idol, Ishikawa Rika.

I’ll be the first one to tell you that I like everything about Rika. There’s nothing about her that I dislike even a little. However, Rika has a personality of gold, and thats the main reason she’s my favorite idol.


I really admire her start in Morning Musume. When she joined, she was one of the new, young members, and was just as inexperienced as the other three in the Fourth Generation. However, immediately she took a position as the group’s older sister; she took it upon herself to be responsible and take care of her generation and the juniors afterwards. Some of the other idols found this annoying; Fujimoto Miki definitely didn’t like it, and I’ve heard that Kago Ai would get upset with Rika. However, even though taking a position of responsibility doesn’t make you popular, necessarily, I think that Rika’s responsible personality has lead to a lot of great things in Hello!Project.


In addition, one of the stories I’ve read from interviews in books and things is that when Rika joined she wasn’t confident AT ALL. She didn’t think she was good enough, and was kind of depressed about it for the first year after she joined. One thing that stands out in my memory is when she joined Country Musume as the new member (for Country Musume ni Ishikawa Rika) she thought she was being transferred permanently, as kind of a “you’re not good enough to be in the main group, so we’ll put you in the less popular group” type of manner. However, she was able to get over this, created a memorable TV persona out of this insecurity (Charmy Ishikawa, an overconfident self-absorbed TV host), and ended up as a great idol.


I also really admire her work she’s done with her skills as an artist, especially as an actress and as a singer. She worked really hard to do her acting roles and it pays off; she still gets acting jobs quite frequently now. For Sukeban Deka, in addition to doing all her idol work, being the lead in v-u-den, she trained 2 hours a day in yo-yo for months. That takes dedication! As a singer, she started off as admittedly not the best of the singers; she simply isn’t a natural at it. However, I’ve heard a live recording of her singing at a stage play, and she has the most beautiful voice! She’s improved quite a bit, which I think is more
admirable than someone who started out with the best voice.


Finally, one more thing to admire her is the couple of charity shows she’s done. A couple years back Rika did two or three shows where she traveled to different countries, to highlight poverty in them. The maturity with which she dealt with seeing such hardship was admirable; when she spoke to the people living there, she didn’t look down on them, but she treated them with respect. She helped gather water at one village, held a child that was both dirty and looked diseased, and when the point of the show, the water purifier they were bringing to the people, was brought out, she drank the purified water even though it frankly looked pretty gross.


I could ramble on and on about Rika, but I’ll stop now XD. I just have to say that she has a lovely, mature personality that makes her an idol to admire.