Song: When I first listened to Egao no Kimi wa Taiyou sa, I hated it. Not just dislike, I thought it was just terrible. However, something amazing happened. I kept watching the PV (partly out of my interest in the group and partly because of the PV), and the song suddenly grew on me, where I began to like it where I had hated it.

This isn’t to say the song is perfect. By all means, there are still the flaws it had before. The most noticeable flaw is the weird phrasing of lyrics in the song, where words get bunched together and the girls have to very quickly sing lyrics in small places. It’s hard to imagine this particular melody without the weird phrasing, but it does sound unprofessional and a bit odd.

I think the thing that I appreciate most about Egao no Kimi wa Taiyou sa is more of what it represents for Morning Musume than anything else. While I’ve really enjoyed Morning Musume’s latest output, I have wondered, like many others, if the group would get stuck in the EDM genre and eventually play out the genre until people were sick of it. Hello!Project has a terrible habit of adopting a “If it’s not broke, don’t fix it” mentality, and since Morning Musume has been suddenly selling better than the group has sold in years and years, I was worried the group would get stuck in a rut. Egao no Kimi wa Taiyou sa still fits the mold in that it does use EDM. However, this song experiments with using the group’s signature sound and making a lighter, happier song. In a way, they’ve proven that they can take the group’s signature sound, and still have very varied songs.

This song, while initially something I really hated, has grown to become a song I love, and one that I think represents good things happening for Morning Musume. 8/10

PV I think green screen has been getting a bad rap lately. It’s a tool, and like any tool it can be used well and used poorly. I understand why Morning Musume fans have lately held it in contempt, for sure; Up-Front tends to use it pretty poorly, like in the case of the Help Me PV where it was a poor substitute for actually being outside. However, with an interesting aesthetic style, a green screen can be a great asset. Morning Musume has somehow managed to use this well. 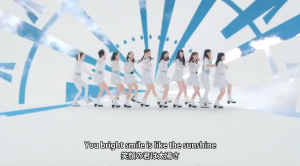 By only using the green screen sparingly, as patterns that move with the girls to the song and to the dance, the PV looks a lot more interesting than in something like a Help Me situation. This elevates the standard H!P studio PV from being basic to being something visually interesting and appealing. I honestly can’t remember the last time I watched a H!P PV because I found it to be an interesting PV. 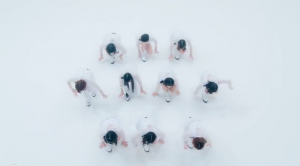 The PV is actually shot well, too. I really enjoy the opening shot that starts up overhead and tracks down to in front of the girls. Since Morning Musume is still (rightfully so) getting known for its formation dance, I’m glad that they capitalized on this with some good bird’s eye shots.

The lighting is also good, especially by Hello!Project standards. While I would change it a few places, this is miles above the awful flat lighting they were trying to use for a while. 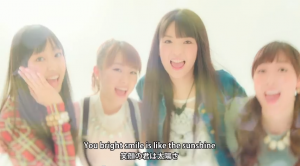 By far my biggest complaint is the blurry, bloom effect that they used on the close-ups. I don’t object to the idea of it, but I do object that it gets used as much as it does. This isn’t as bad as some other effects (see: One Two Three), but it does detract.

This is a solid PV that is a step up from other recent H!P efforts to show off Morning Musume’s strengths while having a unique visual style. 8/10.

Song: This is the least interesting song on this single. Not to say this is bad; I actually quite like it. But for being a fairly experimental and interesting single, Kimi no Kawari wa Iya Shinai is fairly standard. Which makes sense; this is being used as the cheer song for the Japanese team at the Olympics this year, so they would want something that was energetic, exciting and all that (I do particularly like the “Nippon” chants; they sounded nice here).

This doesn’t sound particularly like Brainstorming or Wagamama Ki no Mama Ai no Joke (It might be a bit closer to Ai no Gundan) but it’s in the same mold of cool song. I don’t think it’s quite as good as Brainstorming or Wagamama, but that’s in part because of how great I thought those two songs were when I first heard them and now some of the novelty has worn off.

Really, I don’t have much more to say about this song than that. I know I like it, but as a song it’s the least interesting and least remarkable one of the lot. 7/10.

PV: As a PV, this is a lot less interesting than Egao no Kimi. 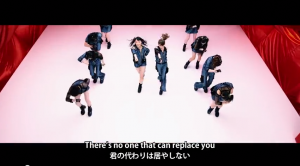 Production values are still good here; I like the camera angles and the lighting. I feel like H!P hired a new team or got their PV people in gear, which makes me VERY happy. This PV is shot much better than a lot of H!P’s older stuff.

Like everyone else ever, I’m not sure how I feel about these outfits on this background. They kind of clash, but at the same time look fine. H!P’s always had iffy costumes at times, and this is hardly the worst of the lot, but it does stand out. 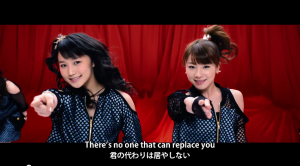 One of the biggest strengths of these PVS (not just Kimi no Kawari but all three) is just how strong these girls have gotten. Gone are the awkward days of early PVs, Morning Musume is now full of pros. While I think that a stagnant lineup is a mistake and that they really ought to be working on that 12th gen, I can see why H!P would be hesitant; all the girls in MM are solid, and work well together. Riho and Ayumi do a great job of starting things off here, and Kudou Haruka stands out.

The green screen used in the closeups is the weakest part, but it’s mostly harmless and unobtrusive.

Despite weird costume choices, H!P puts out a solid effort with this PV, even despite being unremarkable. 7/10

Song: What is love? How I feel about this song.

What is Love brings back Morning Musume to what made me fall in love with the group in the first place; playing with genres within the contexts of pop music. The first Morning Musume song I heard and loved was the good old Mr. Moonlight Ai no Big Band (also probably why my first favorite was Yossy), and I still love how it brings back an older genre of music into pop music. What is Love does what Mr. Moonlight did to big band, only with swing, and adds on some additional interest with combining it with the EDM/dubstep inspired sound of Morning Musume’s current era.

What is Love is catchy, exciting, and I just love the swing music sound that they throw in there. This is one of Morning Musume’s best songs in years, and I don’t say that lightly. Morning Musume has improved a lot in the past year, year and a half, and What is Love is, to me, the culmination of that. 9/10.

PV While I’m not opposed to the idea of a live PV (especially on a single where there’s two other PVs going on). However, live PVs can be done well and they can be done as, well, an easy PV.

Team Syachihoko’s Soko Soko Premium is a good example of a live PV; it takes multiple live performances, and edits things together so that the PV conveys some of the energy of the group’s live performances. What is Love often falls a bit flat at this.

What is Love isn’t bad, per say, it just feels like a bit of a cop out. I like Morning Musume live, and I don’t see much wrong with the PV, but it could be a lot better. 6/10

Overall, I’m impressed by this single, in addition to being impressed by Morning Musume as a whole in the past years. While the first two songs took a while to grow on me, once they did I really enjoyed this single and I’m happy it’s been so successful.