One of the things I’ve come across lately is discussion about Rev.from DVL that focuses on Kanna. Which is totally fair. I mean, look at this face. One in a thousand year idol indeed. 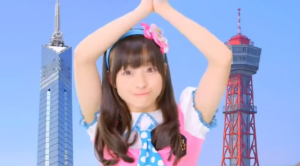 But seriously, I understand why this group is being regarded as being overhyped, or, when people review the group, they are just reviewing Kanna. She is really big on her own. However, as the resident Rev.from DVL fan (at least, from what I know of the international idol communitY), I would like to give my case for the group and why I think they’re more than a flash in the pan group.

Before 2ch and Kanna

One of the things that I found out just as I was writing this post is that Rev.from DVL has been around much longer than you guys probably think. The group was originally just named ‘DVL’ and was formed in 2003. Yes, not 2013, 2003. There is one member left from that original lineup, and that’s Rev’s former leader and one of my favorite members, Washio Miki.

But most of the current members have still been around for a long time. There are thirteen members in the group, and nine of them joined before 2011, which is when the group became Rev. from DVL. But still, the fact that this has been an active group for so long is fairly remarkable, and has allowed all the girls to hone their skills (mostly in dancing).

The songs featured on Rev’s recent major debut single, Love Arigatou, are all songs that have been done by Rev for some time. Before this single, Rev actually put out two local only singles, Love Arigatou and Ai ni Kinshai. Love Arigatou in particular was the big signature song for Rev. from DVL, at least since the name change, so it’s notable that they kept this song (even though there is a change in arrangement).

But even though the group has been around for a long time, most of what they did was perform locally, doing lives on the street and doing things for local events. They were supported by their agency, Active Hakata, but they were very indie. In fact, much of their success is traced to self-promotion. I found the group through Miki, because she followed me spontaneously on twitter. While the group has been around for quite some time, the individual members are very active on social media, through blogging and twitter (each member has both a blog and twitter).

In fact, one of the prevailing theories about how Rev blew up online was that the original poster of Kanna was someone from the agency or someone related to the group itself. This is just a wild guess, but it’s an interesting one at that.

Just a recap: Rev from DVL hit the national idol scene when someone posted pictures of Kanna on popular site 2ch. Since then these pictures spread like wildfire and Kanna has gotten a lot of attention, through the news, CM deals, and so forth.

One of the things that I’ve seen people wonder is how the other members view Kanna, since she’s getting all this attention. Which is a fair question. However, I don’t think there’s a lot of animosity. First, Kanna was always the most popular member of the group. She was certainly not known to the degree she’s known now, but Kanna got a lot of attention before hand.

Rev from DVL made an appearance on Hey!Hey!Hey!, and they actually asked something along those lines. The answer the members gave, which is what I was thinking, is that because Kanna blew up, the group was able to get a lot further. They could have a major debut single with a sizable budget and they could perform on national TV. I’d imagine there is some level of jealousy, but I think, almost more than anything else, there’s a feeling of gratitude for Kanna. She became popular, but she chose to stick in Rev from DVL instead of going to another group or even going solo.

In fact, I’m pretty pleased with how much other members are being focused on. Hey!Hey!Hey! specifically allowed for other members to get some focus. This Music Dragon performance gives a lot of close ups to other members. There is a lot of focus on Kanna in the PVs and on these programs, but they make it clear that Kanna isn’t the only member, which is gratifying.

So now that Rev from DVL has made their major debut, what’s the future for them? Well, Love Arigatou just came out, so it’s hard to tell. However, they did just receive #3 on the daily Oricon charts, selling 6625 copies. Which isn’t terrible, for an indie group’s major debut with two main versions. There are a few more web versions sold via Chara-ani, so it’ll be interesting to see where the group ends up. I imagine that the total final sales will end up at around 10000, which is a very respectable debut.

Beyond that, while I don’t know if Rev has ability to be the next big group on the level of AKB or MomoClo, but I don’t think that they’re going to go away any time soon. The group has been around for over 10 years; they deserve a bit of time in the spotlight.

Honestly, it’s hard to describe why I love this group so much. Since the group has been getting a lot of hype, it’s hard to justify it. However, here’s my basic thoughts.

When I found the group, they were very indie. But, for an indie group, they had a very strong performance level. Love Arigatou was a really catchy song to hear from such a tiny group, and I was really impressed by the group’s dancing and singing skills.

This is the first performance I really watched, and I was immediately impressed by the level of performance of this group, and the subsequent performances I’ve seen. The biggest thing that draws me to an idol is a genuine love and excitement for performing, and I got that from all the members of Rev from DVL. They’re all just really excited to be idols, which is what made me happy as a fan. If you pay attention to all the mmebers, you’ll see a lot of enthusiasm,

Since their major debut, I’ve continued to be impressed by them. While I prefer the original arrangement of Love Arigatou (I plan on reviewing the two PVs for this single on Monday…), all the things I was impressed by have only magnified. I really enjoyed their appearance on Hey!Hey!Hey! and I hope they get more variety exposure, because that could be a big strength for this group, as shown by that appearance.

While Rev from DVL might seem like a flash in the pan, I see a group that has been around for a long time and is finally achieving success after ten years of growth. I honestly can’t wait to see more from them.

If you are interested in any particular member or aspect of the group, their website (rev.jp.net) has a solid site. Otherwise, feel free to ask me any questions because I love this group!