You didn’t think I wouldn’t review this, did you?

Song: This song is the spiritual successor of Shuto Iten Keikaku, in a good way. Doing a six and a half minute techno track is not what I thought Team Syachihoko would be doing when I first got into them, but this type of thing fits surprisingly well. I’m not a techno expert, so I can’t attest to how good or genuine this is on that vein. However, the songwriter is Yoshida Tetsuto, a Japanese techno artist who has done a few things with idol acts like Negicco, but not quite to the level of writing Ii Kurashi. However, as someone who has more experience with techno than pop, Ii Kurashi is yet another very appealing song by Team Syachihoko.

Ii Kurashi is a song that will grow on you. It’s the ultimate earworm; the first listen or two might not grab you, but the song will eventually grab hold and not let go. The thing I find remarkable about Ii Kurashi is that, for being six and a half minutes, it never outstays its welcome. One of my biggest complaints for a lot of idol music is when it drags out too long; there’s no need to overextend a pop song. Ii Kurashi is long, but it works while being long. Everything feels like a perfect length and, when I first heard the song, I almost couldn’t believe that it went on as long as it does.

The arrangement works very well, even though I’m not usually partial to completely electronic instrumentation. I think the big difference is that an actual techno artist wrote this song, so the rhythmic techno instrumentation works well.

Everything about this song works in a way I never really expected. It’s well-written, well-arranged, and well-performed. Even when the song changes things up (like in the rap section), things just work. While not being a very typical Team Syachihoko song, the group has taken a techno song and made it their own. I love it. 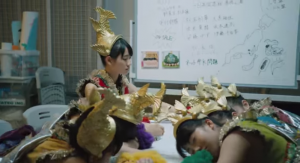 What I mostly mean by that is how the PV flows; whereas Shuto Iten Keikaku flows smoothly from transition to transition, Ii Kurashi does something similar, only on a smaller scale. While Ii Kurashi does have a fair number of obvious cuts in the editing (in contrast to Shuto’s smooth transitions), the scenes transition from one to another mostly by use of sets moved around by people in white. This gives an intentional low budget feel that works. This makes Ii Kurashi have a distinct, good looking visual style. 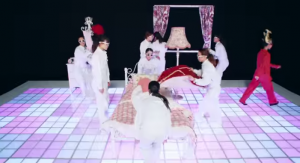 The sets are simple and pleasant looking; they are never showy or ugly. This adds very well to the distinctive visual style that Ii Kurashi is going for.\ 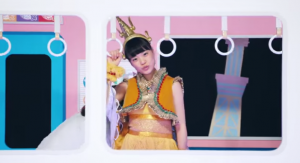 . There are occasionally some props used and, near the end, a section that allows the girls to wear different costumes. This is used sparingly, and always for emphasis. This adds a lot of visual intrigue to a relatively simple PV. 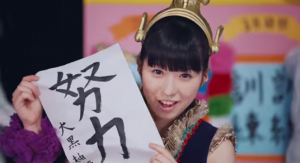 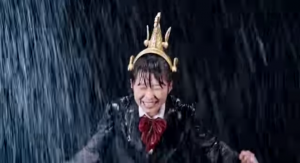 Generally, this is a very well shot PV. The lighting is always fantastic, for example, which certainly helps the PV’s visual style. 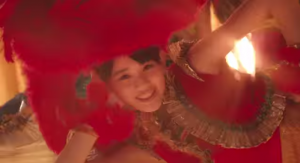 The only thing that I dislike about this PV is that there are occasionally some shots where the framing is a bit weird. I understand why; they’re trying to do stuff in one shot, they’re zooming out, and as such Nao gets cut off, but it still looks kind of weird to have shots where one of the members is almost (but not entirely) cut out. 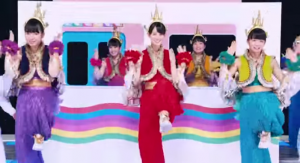 Other than that, Ii Kurashi’s PV is simple but well-produced, with a distinctive visual style that makes it a wonderful PV.