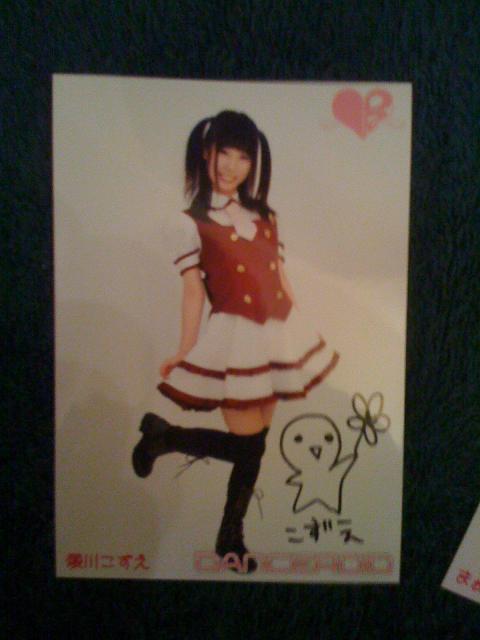 Kozue <33333333  Another awesome autograph to add to my collection!

Getting that photo simply made my day!  BTW, I won’t go into a long dissertation on why I haven’t posted here in almost three months.  In short, I just haven’t had anything to say.  I am still as big a J-pop fan as ever.  For obvious reasons my “CK in Japan” series has been temporarily postponed.  I did have a trip planned for late-March, but I have rescheduled it for the Summer.  Anyway…

So why did a simple “GETS” post bring me back to this blog after a 3 month hiatus?  If you have followed my multiple blogs over the years you surely know I have had a fascination with YouTube/NicoNico star Aikawa Kozue.  Like Momoclo, who I first saw when they had 40 fans in the audience, quite a few of us have been watching Kozue since she was a very special, but regular girl trying to get noticed on the internet.  But for the past 1+ years she has been making her mark in the idol world with the J-pop dance troupe Danceroid.  To be honest, I probably wouldn’t be paying too much attention to them if it wasn’t for Kozue.  But she is there, so I love them!

What I also find fascinating is that this relatively new ensemble has already released a Box Set!  The moment Kozue announced the release on her blog I knew this was going to be a “must-have”.  Two DVDs, one CD and some autographed Pics.  This is going to be awesome!!! 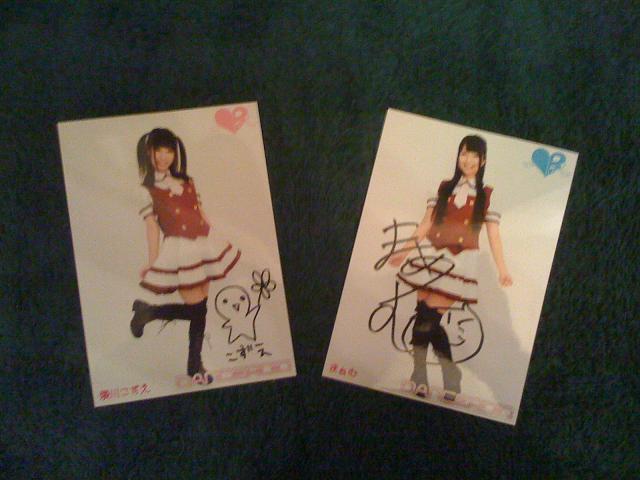 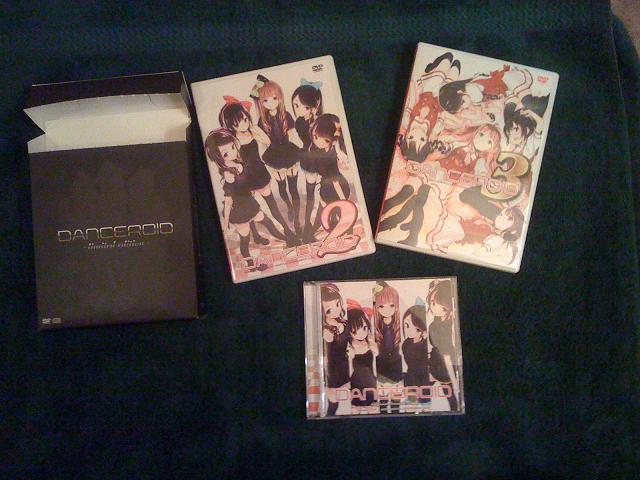 First and foremost, I wanted to see who’s autographs came with my set.  As I opened the package (the thin packaging giving a similar experience to opening a box of breakfast cereal) I could immediately see the first pic, it was Maamu.  Oh well, I had one more chance to get the autograph I really wanted.  I carefully opened the package to reveal the second photo…and there she was.  Yayy!!!  I was so excited that I immediately sent her a message on her blog, on Twitter. I wanted her to know that her set had already made it to the U.S. shore 🙂

Anyway, wall of its low-budget cheeziness, I just love this box set.  Each DVD has eleven tracks.  There are 10 songs total, and each has 2 PVs, one being a dance shot.  There are also 2 live performances and as Maamu describes, plenty of “surprising offshots” 🙂  I’m not sure if any of these songs are original compositions.  As expected, there are quite a few Vocaloid songs here, as well as IOSYS’ Miracle∞Hinacle, which is one of my favorite song/PVs of the entire collection.  There is no YT upload of the video, but here is the original song and anime…

A preview of the DVD set…

So for all of you supposed Kozue fanatics, here is your chance to really support her pursuit of idol stardom!  You can order the Box set right now from Danceroid’s Official Store, or you can wait a month since Danceroid is partnering with Kawaii Girl Japan to sell their products overseas.

I know a lot of you are rooting for Kozue.  I am pretty sure she is aware of her overseas fans on YouTube, and seemed especially proud on her blog that this set would be made available overseas.  So don’t let her down!

Tokyo CLEARS’ New Home Base, No Plan’s Free Live, and a Bunch of Other Cute Idols