Landed at Narita Friday afternoon. I made this trip with one series of events in mind, and I’ll give you one guess which events they are.   But there will plenty of other fun to be had!  After having a nice sushi dinner with the gang from Selective Hearing and New School Kaidan in Akihabara UDX, I went back to my hotel for some sleep. I had to be up super early on Saturday to catch the Shinkansen, and I knew the jetlag would be kicking my ass all day…

So I woke up an hour late, scrambled to clear my head and get ready before I jammed for the train station. If I had caught the earliest train I would have made it to Port Messe around 8:30am. Now my ETA was closer to 9:30 am. I figured I would get a crappy spot since I was so late. But when I finally got there I noticed hardly anyone was inside the venue. They were all outside photo trading. The goods line was short, so I grabbed a few photo packs before I went in.

I lucked out and got a Section A ticket. That is the closest area to the stage. It wasn’t even 1/3 full yet, so I was standing around 5 people from the front rail. This is one of the reasons I love going to sister group events in places other than Tokyo. The crowd is a bit lighter, so you don’t have to wait in as many gargantuan queues. That said, there were plenty of people there. Even more than attended the Kiss Datte Hidarikiki event I went to last year.

Mini-live started, Kage-Ana was done by multiple members doing silly voices. I wasn’t sure who was who, but I am fairly certain I heard Jurina and Akarin. Show opened with 1,2,3,4 Yoroshiku. This was my first live look at idols in 6 months, so it felt great when I first spotted Masanya. She looked gorgeous of course.

For some reason I am blanking on the rest of the song order, but I know they performed Choco no Dorei, Banzai Venus and Kataomoi Finally before finally doing Utsukushii Inazuma. They ended the show with SKE48.

For the MCs they first did the bit where they grab props from a table and use them for joke impressions. Mikitty was great! She kept grabbing an old broom, and doing Harry Potter Quidditch bits. A couple of the girls also did puns with Kato Rumi’s name. For the 2nd MC they had a mini-skit battle referee’d by Dasu and Jurina. Yuria played the guy in all of the scenarios. They battled by team, and Masanya won for Team S in the first round. Team KII was very funny. Every time they lost they would “beat up” the girl who got beaten. First Churi, then Matsumoto Rina. That bit was a lot of fun, and everyone was surprised at how well Ego Yuna did. (However, she still lost to Furukawa) The hour flew by quickly, now I had lunch break to figure out how I would use my 13 tickets!

Since I was in A block, I got to go to the handshake area relatively early. I figured I would go visit Akarin first before her line got too huge. But they had screwed up her sign and placed it where the handicapped queue was. I asked the staff and they pointed me to Lane Three. I thought it was wrong, but he insisted that was Dasu’s lane. It wasn’t an extremely long line either. I looked over and saw Jurina’s huge queue, and what I figured must be Yuria’s huge queue. It wasn’t until I got to the front that I confirmed what I had suspected.

Lane 3: Takayanagi Akane (1x) This is Churi’s line!!! I was caught completely off-guard. So I said my quick hello to Churi. As always, she asks me if I am genki, then I get pushed out as I respond. As I headed back outside I passed the rear of all the booths. Mikitty spotted me and started screaming. Hahaha, she remembered our exchange back in June for sure!

The wait for everyone to queue for their first handshake wasn’t long at all, maybe 10-15 minutes. There were 13 lanes, and I managed to visit 9 of them at least once. Originally there was a 14th lane but Rena called in sick. I think that is a general law. You can pretty much always expect one sick Matsui for any SKE handshake event. Almost all of my favorite SKE girls were there, except for Kaotan. Yumana was originally scheduled, but she got replaced. So that was a slight bummer too. In addition to Churi’s solo lane, these were the other lanes I visited… 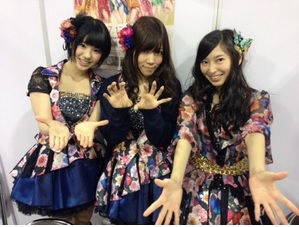 Lane 7: Oya Masana/Deguchi Aki/Umemoto Madoka (2x) It is great to be able to see multiple girls in one shot, except that it forces you to have conversations with girls you don’t really follow. That is often quite awkward. I visited this queue twice. Masanya was excited to see me again. I told her she was great during the MC. I had no idea what to say to Deguchi, but she took care of that and began flirting with me. I pretty much just introduced myself to Madoka. The second time around I told Masanya that I was rooting for her in Ebi-Friday Night, and gave her a “Komanechi!” Aki thought that was cute and started laughing at me. So this lane was an overall success.

Lane 6: Ishida Anna/Nakanishi Yuka/Miyamae Ami (2x) Anna is another girl I visit often, so I always get a good reaction. This surprised Yuka, who then began playing matchmaker with me and Anna. She kept asking if I loved Anna, and if Anna was my oshimen. Of course I lied. This continued the second time I went through her queue, so I just played along. Unfortunately I had no idea who Miyamae Ami was, so all I could really do was say hello and where I was from and pray for a quick staff push out!

Lane 4: Suda Akari (1x) I really wanted to say hi to Dasu, and I was burning through tickets rather quickly, so I braved her queue for the 30-40 minute wait. The funniest part was that the staff was literally pushing people out as soon as she grabbed their hand, so the interaction was 3-4 seconds at the most. But she never fails at a great handshake. So much fun!

Lane 5: Kizaki Yuria (1x) I hadn’t planned on visiting Yuria’s solo queue. But her line wasn’t long at all, and I had never spoken to her before. So I had decided to give her a shot, even though I had heard that she isn’t the most exciting to meet. To my surprise, she was extremely nice. She even ga me a “Yuria-chan Peace!” pose. A very pleasant surprise. Another great lesson, while it is great to get advice from people on certain girls handshake experiences, sometimes you need to just see for yourself.

Lane 13: Suga Nanako/Kato Rumi/Kaneko Shiori (1x) I have always liked Rumi, but I was really in this line to meet Kinchan after her character fished me so hard in the AKB 1/149 game! There was no line. As I came up Kinchan looked up and gave me this huge surprising smile. She was even more surprised when I told her I came to that queue especially to see her. 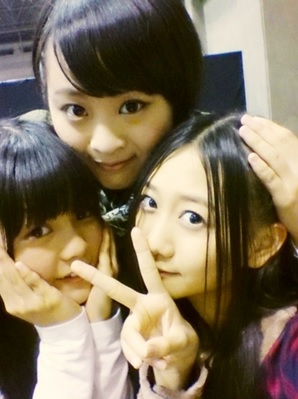 Lane 14: Furuhata Nao/Ichino Narumi/Tsuzuki Rika/Iguchi Shiori (1x) I felt really bad for these girls as their queue was almost always empty. You could see them repeatedly poking their heads out to see if anyone was coming. I don’t follow any of them, but I had never met any of them either. So I figured it wouldn’t hurt to introduce myself and say hello. I basically jumped in and rattled off the usual cliche’s. “SKE48 is great”, “Keep fighting”, that kind of stuff. But I stopped at Iguchi and exclaimed “Shiori-san sugoi!” in reference to her height which might have caught her off-guard a little bit. Although I am sure she gets that all the time. 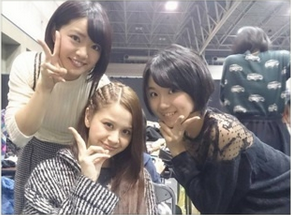 Lane 9: Isohara Kyoka/Kinoshita Yukiko/Yakata Miki (x3) Saving the best for “almost” last, I have made a new best friend in SKE, and that is Mikitty! I posted about my insane experience with her back in June.  The moment she reacted after seeing me in the exit lane I knew I was in for a great time with her. The only problem was that for some reason I don’t really connect with Yukiko. However, I did discover that Yukiko does know a little Spanish. That should be good news for a few people. I really didn’t have much to say to Kyoka either. But it was pretty clear who I was in that queue to see. I reminded her of our exchange at Makuhari, which she remembered. She then asked me to come back through their lane. I got a big “I LOVE YOU” the 2nd time around, and the last time she asked me my name. When I answered she loudly repeated it back “Chris! Chris!” I have obviously connected with her in a major way, evidenced by her Google+ entry after the event. I didn’t even think to look, but one of her local fans found me on twitter and told me about it.  So yeah, Lane 9 was a huge WIN!

I had one ticket left, and I had noticed that one normally huge line had gotten pretty short. So I decided to jump in…

Lane 2: Matsui Jurina (1x) It was pretty quick, but she was super genki and gave me the often-seen “OMG, it’s a foreigner!” look. I congratulated her on the Janken win before getting quickly pushed out. I had used all of my tickets, and it wasn’t even 4pm yet! Oh, and the four lanes I unfortunately didn’t visit were…

It was a great day. Given that I am not going to any individual handshake events this trip, I was so happy I got the chance to interact with SKE. Hopefully some of my favorite AKB members will be at the National Event I plan on attending in a couple weeks. But HKT…and Tani. I have nothing planned for them, I am going down to Hakata next week. Maybe I will get lucky and win a show.

Also, a HUGE Thank You to everyone who sent me their extra SKE handshake tickets. As you can see, they were all put to good use. You guys are awesome!