For me, this event was more of an hors d’oeuvre before tomorrow’s (Sunday) event since I originally planned on only going on Sunday. However, during the application period, I saw Team 8 perform in the theater and briefly took a liking to Takahashi Ayane. Saturday was the only day she was appearing, so I was compelled to buy a few tickets for this day. Now the irony is that I actually did an oshimashi handshake with Amane a couple of month ago, and…well, I wasn’t inspired to see her again. So ultimately I ended up doing an oshimashi with her ticket today. LOL

But it was still a worthwhile day, even with the few tickets I had. I had all my tickets stacked into Slots 2-4, which worked out perfectly since I had another event I wanted to attend in Akihabara later on in the day.

Of course this was another event where you could draw special prizes (2-shots, 1-shots, signed photos, etc.) Interestingly, of the six tickets I had, none of them offered any kind of recording or photo prize. They were all either for a signed photo, or a signed drawing the members all did.. Ultimately I won 2 of 6 (well, 2 of 5 since I blew off my Ayane ticket, and you can’t draw for prizes on oshimashi) Anyway, I arrived at Pacifico Yokohama toward the end of Slot 2, which was enough time to get my Slot 2 tickets done. AKB must have had at least 4 halls rented out for this event, as there were over 100 lanes, a stage area, some drawing exhibit, and all the other booths they have (info, Aikabu, etc.) Despite that, 5 of my 6 tickets were all located in the same corner of the hall.

Akiyoshi Yuka (Lane 73) Yuka-chan didn’t have much of a queue, which is usual for her at the end of the slot. I checked in and immediately won the signed photo. After waiting for 2 fans in front of me. Yuka-chan reached out with both hands and exclaimed “Chris-san!!!” She had on the cutest sweater, kind of 2-tone flesh color and dark green, it almost looked like a low cut blouse, but it wasn’t. 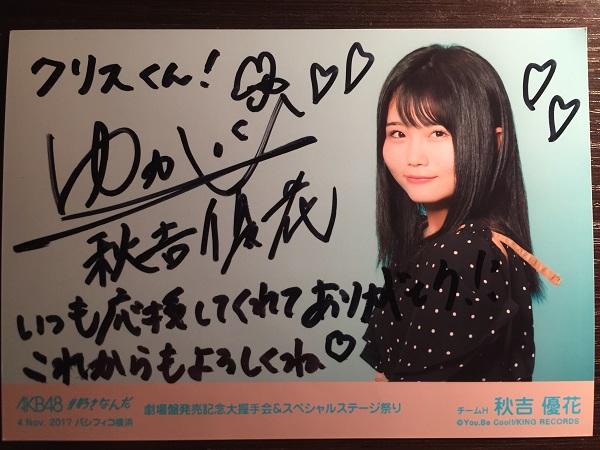 As she signed the card I told her how pretty her sweater was, and I asked if she had a fun birthday, and I saw some of the pictures online. She thanked me and asked if I had heard about their new album. I told her I want to get it, although it is quite expensive. She nodded in agreement, and then out of nowhere she said “Chris-san, I love you so much!” Wow!! I remember when Wasamin said something like that to me a few years back, and I almost got weak in the knees. Same here, Akiyoshi just made my heart flutter.

There was still 10 minutes left in the slot, and I wondered if there was someone available who I could use my “extra” ticket on. Originally I wanted to use it on Cuca, but her slot wasn’t until later in the day, after I panned to leave. I didn’t have a ticket for Zunchan today either, but these days her lanes don’t have the oshimashi “star.” As I walked through the HKT section I found Bibian, Rikopi, and Mio, all starred lanes, all short queues. Okay, this was it. Who would I pick???

Sakaguchi Riko (Lane 57) So this is who I ultimately ended up using my Amane ticket for. I like Rikopi, she is usually a fun handshake, and I hadn’t seen her in a while. I could tell Rikopi wanted to say my name, but just couldn’t recall it in that moment. Instead she just started practicing her English with me. I did ask her about the upcoming HKT album, and told her I was excited about it.

Tani Marika (Lane 54) Despite the fact that I promised Marika I would wear Tani-gear in the future, I failed to bring anything of her’s to wear. And frankly, it has been slim pickings at the goods booth for this single. I actually do have some Tani stuff in my storage unit in the U.S., but that doesn’t do me any good here. Anyway, I won the signed photo, so at least that would keep her occupied. 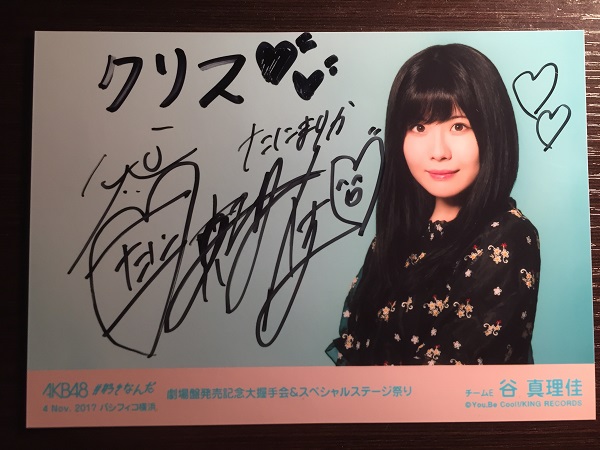 Oh, and she was wearing a “Chucky” (from Child’s Play) t-shirt. So I immediately got her talking about that as I pointed and said “Chucky!” I then told her that I saw her Halloween cosplay tweets. She asked if I thought they were cute. I took a chance and said they were “scary and cute,” and noted the white contacts she wore. At the end she again reminded me that I was supposed to be wearing Tani accoutrement. So I didn’t get off scot-free after all. 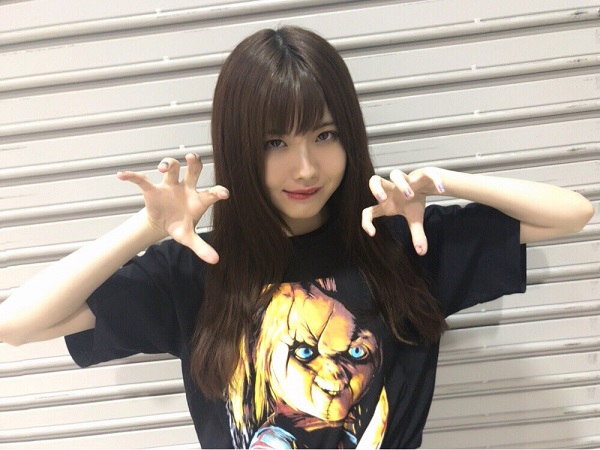 Fuchigami Mai (Lane 62) Maichan had the only really long line I went to all day. I don’t seem to have good luck drawing Maichan’s prizes, and alas, I didn’t win. After around 20 minutes in the queue I finally got my turn. Now I know Maichan is a big Soft Bank Hawks fan. Actually, lately all of the HKT girls have been posting about the Hawks, but Maichan supports them all season. So I asked Mai if she was going to watch the game tonight. I didn’t totally get her response, but I think she said something to the effect that she wouldn’t have time. But she did say that she hoped that they win tonight. So I told her I would root for the Hawks too, and for that I got a High-Five. I told her I would see her tomorrow as the guard pushed me out.

Akiyoshi Yuka (Lane 73) When I entered the queue shortly before the start of the slot, there was still a bit of a queue for Jitoe Nene, and one guy in particular who had a ton of tickets, so they ended up moving the rest of her queue into another lane. In the meantime, while we waited for Yuka-chan to come out I was watching Matsuoka Hana playing with her fans in the next lane. Eventually Yuka-chan came out. It was my goal to get this ticket, and my final ticket in this slot done as quickly as possible because I needed to hustle to Akihabara by the late afternoon. BTW, here is Yuka-chan in her pretty sweater I talked about before… 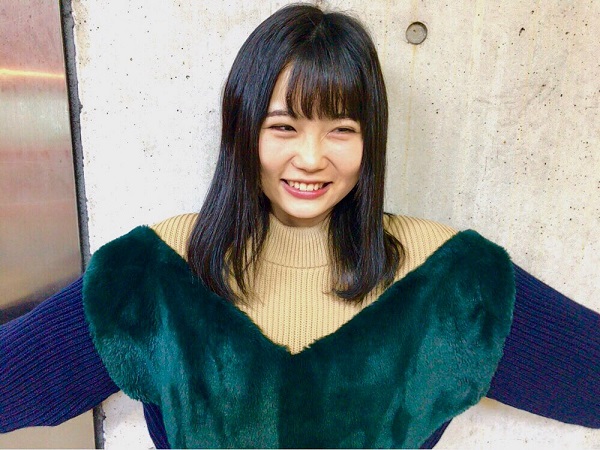 Surprisingly, I didn’t win the prize. But that’s okay since the cooler prize was the first one, which I did win. In any case, I decided to ask Yuka-chan if she is a Soft Bank Hawks fan too. She said yes, and then pointed out that I was wearing my HKT48-Hawks Baseball Jersey. (In fact, I got comments from a lot of people today around Tokyo assuming I was a Soft Bank Hawks fan, LOL) Like with Maichan, I told Yuka that I would root for the Hawks to win. After telling her I would be at the event tomorrow too, I hoofed it over to the far end of the hall for my last ticket…

Ichikawa Miori (Lane 5) Miorin had a fairly short queue. Since I lost the prize when I visited her last time, I really wanted to win this time. The fan in front of me had three tickets, so he pressed the button three times, and he won ALL THREE. SHIT, I just knew the next one would be a loser, and almost pulled my ticket and ID back, but it was already too late, they had marked my ticket. And of course, I didn’t win the prize, again. So I would have to come up with something to talk about with Miorin. Well, she was wearing this cute and fuzzy little hat. So after the usual pleasantries I commented that her hat was very cute. I also mentioned at first I thought the fuzzy stuff sticking out was her hair. She immediately, and almost defiantly said it wasn’t her hair. As I laughed, the guard, rather forcefully, pushed me out. 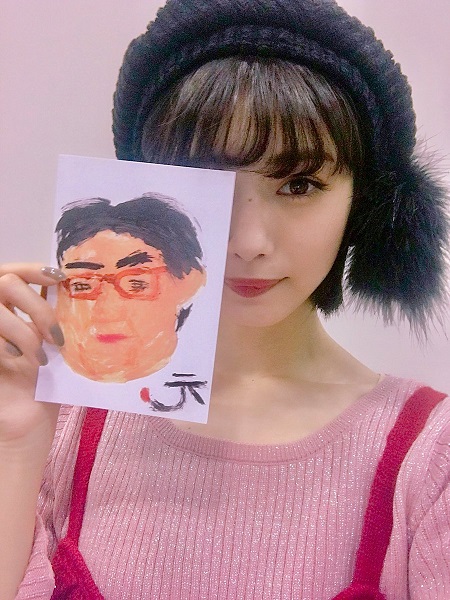 I immediately bailed back to Tokyo, and to my little event in Akihabara. Tomorrow I have a few more tickets. I again have tickets for Yukachan, Maichan, and Tani, plus tickets for Zunchan, Kaotan, Bibian, and Cuca. Not to mention many of the prizes I am trying for are video and 2-shots, so hopefully my luck will be a little better than today.