I remember during Wasamin’s early singles, I would make it a point to attend every single release week event. Of course this was back when I was merely visiting Japan, and had a railpass that enabled me to travel far distances more easily. My how things have changed…

Wasamin’s final big push for her new single started last weekend, with events at DynaCity Odawara, and at Aeontown Kamisato, which is in Northern Saitama Prefecture, almost to Gunma Prefecture. I had already planned and bought a ticket for a concert on Sunday, so that was out. And then I won cancel machi for AKB48 on Saturday. It was a tough decision, since I make it a personal rule to never skip out on any AKB48 Theater win, even a cancel machi. As a result, I ended up not seeing Wasamin the entire weekend. Then on Monday, I missed her furage event at Shibuya Tsutaya since I had two mid-term exams to study for. Those exams also caused me to miss her Tuesday matinee event in Asakusa. It wasn’t until Tuesday night that I would finally be able to attend a release event. But first… 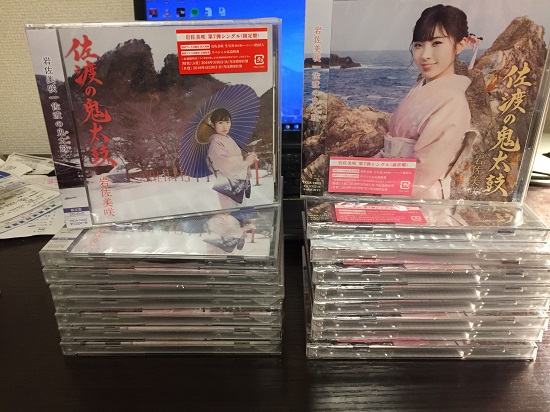 (BTW, this stack has doubled in size since I took this pic)

Wasamin has been doing preorder events around Tokyo for pretty much the last two months. When I attend the events, I usually choose the ‘pick up’ option, instead of paying for shipping at each venue. Since I had five hours to kill before Wasamin’s release event at Osaki Gate City, I decided to use the afternoon for a whirlwind trip around Tokyo picking up various preorders. And what a trip it was. Here was the itinerary….

Over 2 hours of train time, on ten different lines!  That doesn’t include the walk time.  I was able to hit all but two of the shops that I has preorder pickups, and ultimately had around 16 CDs stuffed into my bag. (along with my school books) I made it to Wasamin’s event with around 30 minutes to spare… 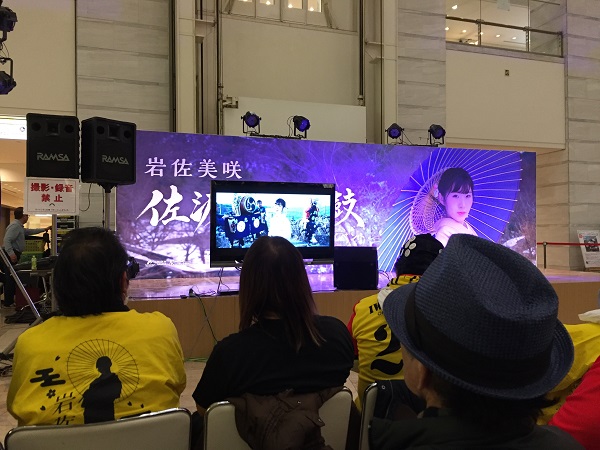 This area is a relatively new development, built onto the South End of Osaki Station. It is a beautiful office complex/restaurant and shopping complex. Anyway, as I came down the escalator I saw the rows of cameras positioned opposite the stage, as well as the huge stage backdrop promoting Wasamin’s single. This is a bustling mall, with lots of restaurants positioned all around the atrium, so the event promised to draw plenty of onlookers who would be passing by. I immediately went to the CD booth and purchased three copies of the new single, and grabbed a seat in the third row. In the meantime, Nishiyori Higashi, NagaraPro’s emcee, was warming up the crowd. He asked us not to use lightsticks, and then tested our cheering to see how loud we would echo in the venue. Ultimately it was decided that calls and cheers were okay. 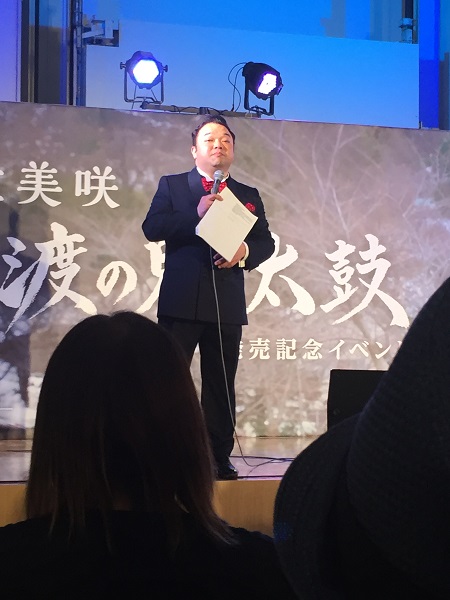 Then Higashi-san turned to me and asked where I was from, which I thought was slightly odd since by now I have seen him enough for him to know I probably live in Tokyo. After I told him I was an American, a few minutes later he turned back to me and acknowledged that he was pretty sure I lived in Japan, and asked where. When I said Tokyo, he was like “Yeah, there are like 23 wards in Tokyo, which one?” When I said Itabashi, he was amused that someone would come from America to live in Itabashi, LOL. After all that, it was finally time for the event. Here is the setlist…

Also, her matinee setlist, which I didn’t attend…

Wasamin was wearing a new blue Kimono, which was made especially for her. The event itself was extra long since 1) Higashi-san was emceeing, and 2) there was a section reserved for press photography. In fact, the press cameras were moving all over the venue recording and photographing the event. (I looked for footage in YouTube, but haven’t found any yet) It was also announced that her fourth concert DVD/BluRay is in the works, which was expected. It was a lot of fun watching Wasamin interact with the photographers. It reminded me of her old AKB days, and the way she can effortlessly shift from pose to pose. One funny moment, when Wasamin announced that she was going to sing Yume Shibai, they accidentally played Shitamachi no Taiyou. Wasamin looked confused for a second, then started laughing. Ultimately, they turned it into a promotion since both songs are on the new single. After Wasamin disappeared for around 30 minutes for press interviews, she came back out for the handshake/2-shot portion of the event. 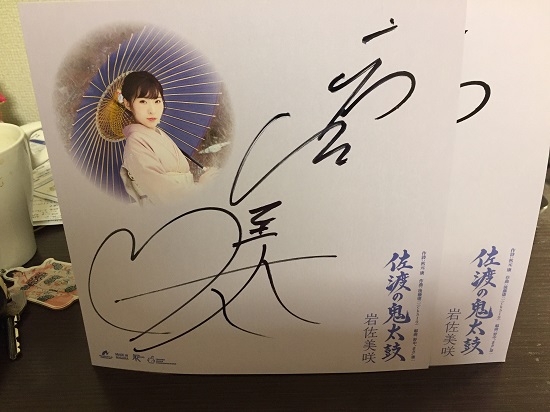 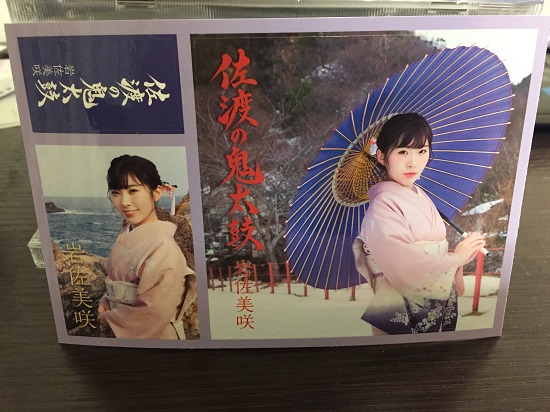 Yes, they were offering a shamekai option for release week. They were also doing a drawing for prizes, where you could win either 1) Your CD signed, 2) Personal item signed, 3) Release poster, or 4) signed 1-shot cheki. I’ll tell you right off the bat that I got skunked on prizes, although my friend and fellow Wasafan Andy-san won. It was his first Wasamin event in almost four years, I was so happy to see him. As for the 2-shot, you simply needed to use two tickets, which was easier than last year, where you had to buy one of each version for the 2-shot. Oh, and while I was waiting in line, Higashi-san was standing off to the side, so I went over to him and told him that I was really surprised to see him sing at NHK Hall last week, and that he was a surprisingly good singer. He laughed, shook my hand, and thanked me. Meanwhile… 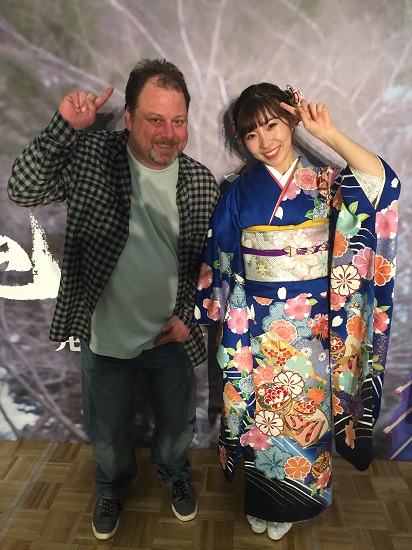 Basically, for my two trips to see Wasamin I was telling her about my experience at Enka Matsuri last week, and that I had a prefect seat and got to meet all of the big stars. I also told her how Mizumori-san gave me total kami-taiyo treatment, and was trying to speak English with me. Wasamin was laughing, saying that it is so like her to do that, but she was also laughing at my Japanese. It’s odd, when I mention the other Enka singers, for some strange reason I always forget to add an honorific when saying Mizumori-san’s name. I use them for everyone else (Kiyoshi-san, Toshimi-san), but I always just say “Mizumori.” Anyway, Wasamin thought it was kinda funny.

The 2 1/2 hour event finally ended, and it was late. I needed to go home and do some reading. I had another ‘date’ with Wasamin tomorrow night…

When I left for the day, I almost forgot to grab my Wasamin Happi Coat. I hate stuffing it into an already semi-full bag, but I wanted to have it in the off-chance I won a prize at the event. Anyway, I was off at 4:45, and it is an easy trip down to Yokohama from Azabu, so I arrived in Yokohama two hours early. After spending an hour at 82 Ale House for cocktails and hors d’oeuvres, I headed over to Tower records. There were only a couple of people there, so I was able to buy my CDs and get a spot right in front. It was 40 minutes before the show. As they were doing the pre-show instructions and promotions, Wasamin sneaked up onto the stage while we were looking the other way, LOL. Here is the show setlist…

And for those keeping score, here is her matinee setlist from her Koiwa event, which I didn’t attend..

It isn’t often that I am front and center for Wasamin events, but it is fun to be two feet away from her while she performs. During her performance of Sado no Ondeko, I was trying to mimic some of her hand gestures. There is also a ‘call’ portion during the instrumental part where she does various ‘oni’ poses. She was again wearing her new blue kimono, which I got a nice look at. Wasamin was commenting how she knows many of her fans do work, and can’t make the matinee shows, so she was thankful people came out after work.

Once again, the 2-shot option, as well as the prize option were on the table. I also asked about the stamp card promotion, which ended. I am a card short for getting the bag, but Ichikawa-san said it was okay. They also have another prize where if you have 10 losing draws you can get a Wasamin pin as a consolation prize. Like the previous day, I had three tickets, and planned to do one 2-shot and one handshake…

And whaddya know, I won the signed personal item prize. FINALLY, I was going to have my Happi coat signed!!! But I would have to wait until the end of the event for that. For my first visit I was telling Wasamin about seeing Minyo Girls perform recently, and a few of the songs they sang were also in Wasamin’s catalog. (Momen no Handkerchief, Shochuu Omimai Moushiagemasu, Valentine Kiss) Wasamin was surprised to hear this. I told her that Yuua-chan (from Minyo Girls) was also surprised when I mentioned it to her. Oh, and we sang a few bars of Sochuu Omimai together.  Later, we talked about the hand motions, as she said she was watching me try to to them. I told her that it is because I have idol fan roots, LOL.

(I’m in dire need of a haircut)

And here is my signed Happi! I have leveled up, and am now among those with a signed version. I can’t tell you how happy I am about this! 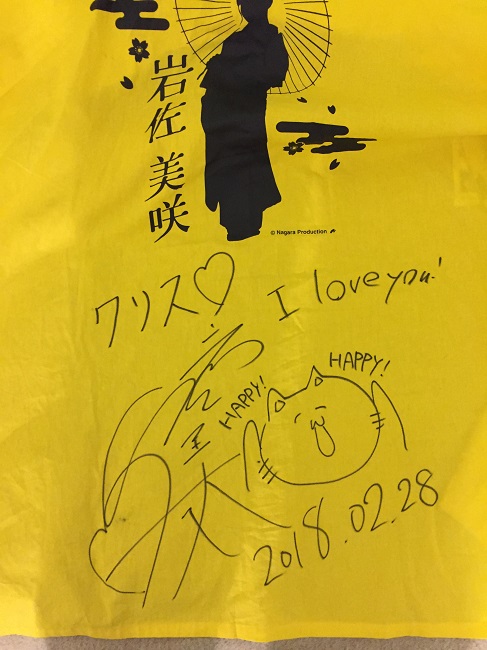 I even got a special Wasamin ‘neko’ drawing!

Wasamin flew to Fukuoka this morning, and will be doing appearances in Tenjin and Osaka, as well as the last date of the Nagara Pro tour, before coming back for one final event on Sunday in Western Tokyo. I’m sure the Wasafans will be out in full force for this one!

Note: Sado no Ondeko debuted at #2 on the Oricon pop chart (behind Arashi) and dropped to #14 today. Not a bad start at all!