Imagine how excited I was when I found out Wasamin and the rest of the gang from Nagara Pro would be coming to my neighborhood for a big performance. It turns out they make this an annual tradition, traveling to different Tokyo Wards for a performance. This year’s show would be a short distance from my apartment, near my local ward offices. Of course this didn’t get past Wasamin, or the rest of the fans. Wasamin knows I live in Itabashi, and she was counting on me to be there.

There were two performances scheduled, but I wasn’t sure I could sit through a full Enka show twice in one day, so I opted only for the evening performance, which I applied for via the Wasamin fan club. In the meantime, when I met Mizumori Kaori (Wasamin senpai) in Asakusa a month or so ago I also told her I lived in Itabashi and would be at the show. The only thing left was to get my ticket…. 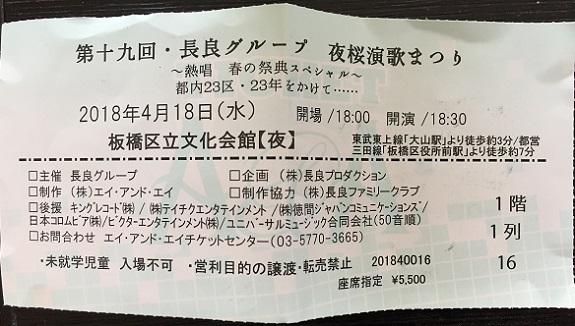 BAM! Front row! Right on the aisle too. This was going to be great. Or would it be? Sometimes being the token foreigner and being in a high-visibility seat can come with some interesting interactions and responsibilities. And today, well…let’s start by saying by the end of the show everyone in the 1200 seat hall knew who I was. But I digress…. 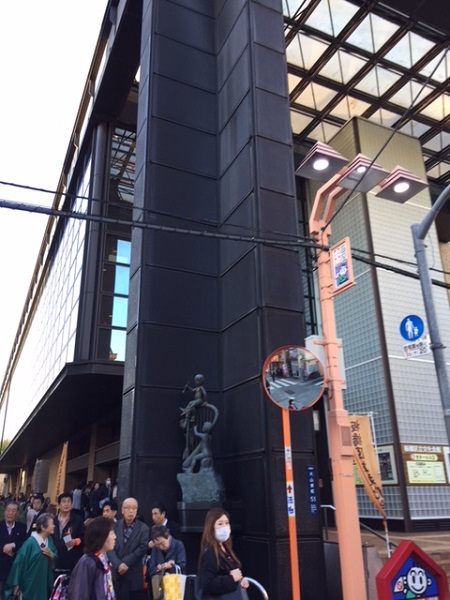 I could almost walk there, but I decided to take the train for convenience sake. I arrived a little early since I had never been there before, and wasn’t sure of the layout. There was already a queue down the side of the building. After grabbing a cup of coffee to wake myself up (I have been sick and on medication the past few days) I queued up. Once inside, it was a madhouse! Per usual, all of the artists had sales tables.  Hayabusa, Billyken, and Wasamin were doing handshakes for people who bought their goods. I saw Wasamin’s sales booth, but didn’t see her. Then I found her all the way at the end. So I doubled back to grab two CDs and handshake tickets, fighting waves of obasans coming in the other direction. I got my CDs, and went back to the handshake table. In the meantime, Hikaru from Hayabusa spotted me and started waving hello. Ya know, they are really nice guys, and I always ignore them at these events…

So I went to see Wasamin, and they were being really generous, giving us about 30-40 seconds per ticket. I welcomed Wasamin to Itabashi. She asked how close my apartment was to the venue (hehe) and I told her two stops away, but very close. I just kept telling her how excited I was that she was performing in Itabashi. She noticed I was sweating, and asked if I was okay. I told her it was because of the crowd of people, which was actually half true. I was also kinda weak from being sick, and all the hustle and bustle in the lobby was getting to me. I told her I had another ticket, and would be back in a minute….

I doubled back over to the sales booth, and I found what I was looking for. I always tell Hayabusa that I like their latest single, I should finally pick up a copy, which I did. I went back over to the handshake table, but this time to see Hayabusa. Yamato was first, and I basically told both of them the same thing. I see them all the time, and I never meet them after performances because I am always there to see Wasamin or Minyo Girls, but this time I wanted to say hello to them. Hikaru actually tried speaking some English with me, but he wasn’t very good at it. Also, I wasn’t aware that the third member of Hayabusa retired from the group a few weeks ago. I noticed he was out the last time I saw them at NHK Hall, and then I noticed all their new promotional material only has Hikaru and Yamato on it. Oh well…

After that I went back to use my second Wasamin ticket. She was showing me these honey glazed walnuts she found at a conbini, and asked if I liked them. I told her I did and asked which conbini she got them from, but she couldn’t remember. Then I showed her my ticket, and that I was in the front row. She was very happy for me. I mentioned meeting Hayabusa, and also told her the story about taking a 2-shot with Mizumori-san, but she acted like she already knew, so I guess Mizumori-san told her. I wished her the best and told her to have a great show. I got away from the craziness in the lobby and headed down to my front row seat… 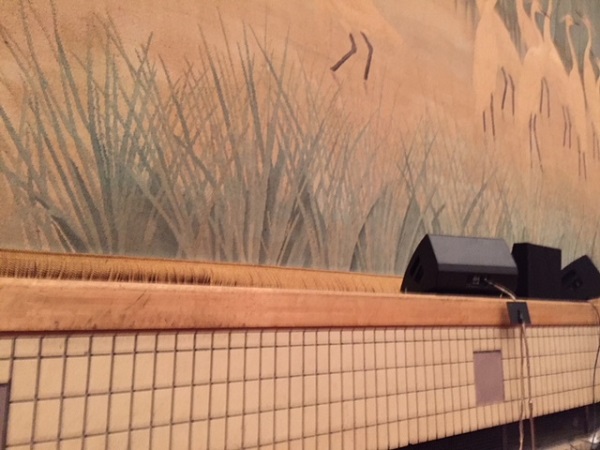 Yep, right against the stage!

It turned out I was sitting next to one of the other Wasafan club members, so that was nice. A few fans came up to me and noticed my Wasamin Happi, most of the crowd were Kiyoshi supporters, but there were patches of supporters for everyone throughout the theater. The show started with a group song and introduction of all the performers. I spied Wasamin staring at me a couple of times, and then Mizumori saw me and gave me a little nod and wave. It was the end of the MC, and all of the sudden Mizumori-san tried to get Higashi-san’s attention, and started pointing to me. Oh jeez….

It’s time for “Look, there’s a foreigner in the audience” Today’s special guest? Me! Yutaka-san, who I think speaks decent English, came to the front of the stage and asked my name. At first he didn’t hear what I said, and then Wasamin blurted out “Chris-san!” Higashi-san then mentioned to Yutaka that he had spoken to me previously, and that I could speak Japanese. Well, that was all fun, but it didn’t end there…

Each performer sang a random song, either an older single, or like in the case of Wasamin, one of her new B-side tracks, Yume Shibai. Kiyoshi, of course, sang his classic Kiyoshi no Zundoko Bushi. After that is was time for the guest performances of Sasaki Isao and Billyken. Isao-san sang his famous theme from Space Battleship Yamato. Next were the long MCs, first Wasamin, Hayabusa, Sachiko-san, and Yuuto. After that it was the big guns. Kiyoshi was wearing an interesting suit, which he described as “Keema Curry.”

Then at one point during the MC, Yutaka again turned to me and said “You understand?” Higashi-san was like, “You okay over there Chris?” Ya know, I didn’t really want to co-star in this show, and of course the fans are having a great time with it. It’s one of those things I will look back on fondly. But in the moment, I was dying. “Just leave me alone!”

The final part of the show was interesting. Each star sang their current single, with the music video playing on the big screen behind them. It’s interesting, since most of the PVs are basically the same. Mainly lots of closeups of the singer, alternating with a picturesque backdrop and an in-studio style backdrop. Only Wasamin’s PV, as well as Kiyoshi’s really seemed to have any directorial or production on them. In fact, I really liked Kiyoshi’s song and PV…

They didn’t play Hayabusa’s Mushi Dance PV I’m guessing because the their member left, instead just projecting their performance on the screen. After one last group song with everyone, including Higashi-san singing, the show was over. As I left I heard my name called by various people about a dozen times or so. And of course the other Wasamin fans were laughing at me. I wanted to join them for beers, but I had to go home and study for final exams.

It was a great show. Being in the first row is really a different experience, even from being in the second row. Unfortunately, they didn’t do their usual “walking around the audience” portion of the show. I was really in a great spot if they had done it, but oh well. And now I really want to see Wasamin too so we can talk about all the attention I got. After all, Wasamin always says that I’m famous. LOL