Here’s another report from one of Wasamin’s “fascinated fans” (as described in a news story at Tokyo Sports) Seriously, it was a really good show, with an excellent setlist, especially the early show. Yes, this concert was actually a doubleheader, with a matinee at 13:30 and an evening show at 18:00. Also, it was on a Friday, so it’s possible some fans couldn’t make the early show because of work, even if the country is currently celebrating the Obon holidays. 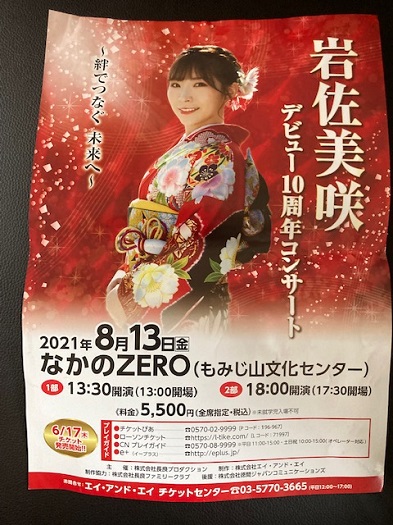 This concert was announced a few months ago, and per usual the fan cub members were allowed to pre-order tickets in advance, pretty much guaranteeing us good seats. I received my tickets via Sagawa Express last week, in two separate packages, along with a signed photo as a gift for buying tickets to both shows. I had 6th row left side for the matinee, and 4th row dead center for the evening. Considering the relatively small size of Nakano Zero’s hall, these seats would definitely be good. I was somewhat concerned about this concert being held in the middle of the current State of Emergency, wondering if it might be postponed. Also, I haven’t received my 2nd vaccination yet. (I’m getting it today) 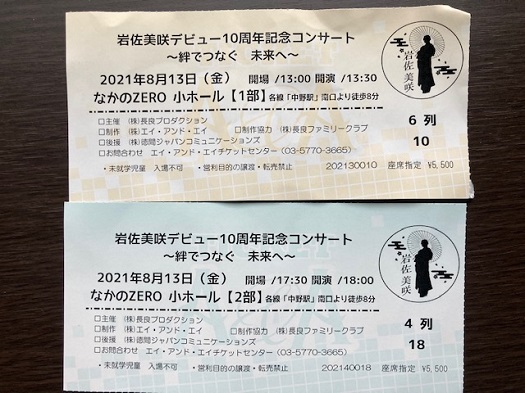 Nakano Zero is a fairly new conference center/meeting center/concert hall located on the south side of Nakano Station in Tokyo. In fact, the company I work for occasionally holds trainings there, so I have been to the venue a couple times before. The hall itself seats around 500-600, but they were limited to 50% capacity. Considering the show wasn’t sold out, I’m guessing there were around 250 fans there. I saw a few of Wasamin’s idol friends come in for the matinee, but they were wearing masks, so I couldn’t see who they were. I also talked a bit with Wasamin’s former manager, Ishikawa-san. I hadn’t seen her in a while. She looked really good! 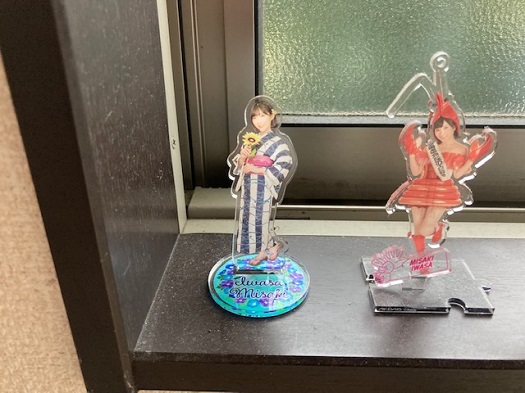 I didn’t see any messages about early-queueing for goods, and there wasn’t anything in particular I was dying to get my hands on, so I decided to arrive around the time doors opened, which was 30 minutes before the show. I queued up for goods anyway since I had plenty of time. Ultimately I picked up two things, the new uchiwa and new acrylic stand. I love those things! I skipped on the t-shirt. I mean it looks cool, but I just have too many t-shirts that are too small for me to wear. So I didn’t want to spend 4000 yen for yet another one. 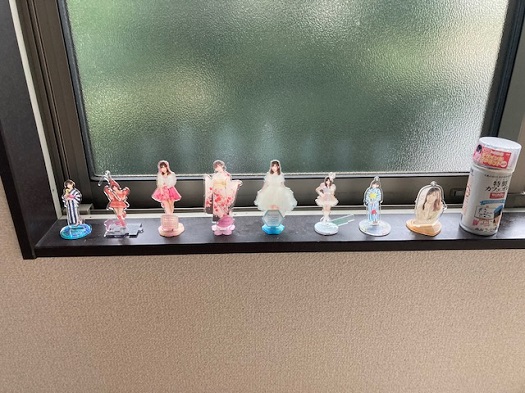 I made it to my seat on time and put on my happi. My 6th row seat had a perfect view! I should mention the rules were 1) masks at all times, 2) social distancing, and 3) no calls, just clapping. It was the same at her Birthday and Halloween events. Anyway, the matinee show started a little late, most likely because the goods line was still long. No matter. Eventually the lights went down. It was showtime! BTW here are the setlists. Instead of writing two separate setlists, I decided to use an “a” “b” format since both shows were essentially the same, aside from seven songs changing. I also noted the songs she has recorded.

My first overall impression was that it was a really fun show, with an excellent setlist. Wasamin looked stunning as usual. I think that was a new kimono she was wearing in the beginning, and the dress she changed into was very sexy. The way the light shined off of her hair almost made her look like a blonde. That might be an interesting look for her to try. 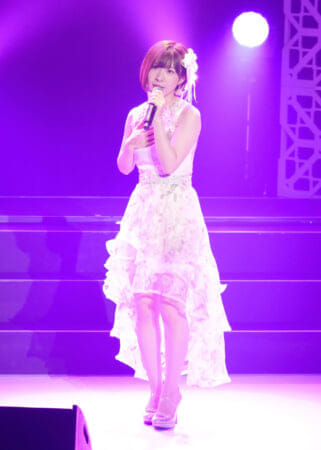 My seat for the first show was great. It was 6th row, but close enough to interact with Wasamin and elevated a bit for a nice view. My evening seat seemed even better, 4th row center with nobody in front of me except for a cameraman. The only issue was that some of the bright lights were positioned directly into my eyes on a couple songs, Ihoujin and Akira in particular. At those points I literally had to shield or close my eyes, so that wasn’t cool. In fact, at one point Wasamin mentioned when the lights got really bright they were washing out the color of the glowsticks.

In the second half of the show she was joined by Senbei-san, the hippie keyboardist who usually accompanies her at her annual “Love Live” shows in Hamamatsucho. As Wasamin mentioned, “Everybody loves Senbei-san!” LOL, it’s so true! He usually never speaks, but Wasamin got him talking in the second show. He also did this bit when she was modeling the new uchiwa, Senbei-san would fall over as if the wind from the uchiwa was too forceful. She also asked him his favorite food, and was surprised when he didn’t mention senbei. 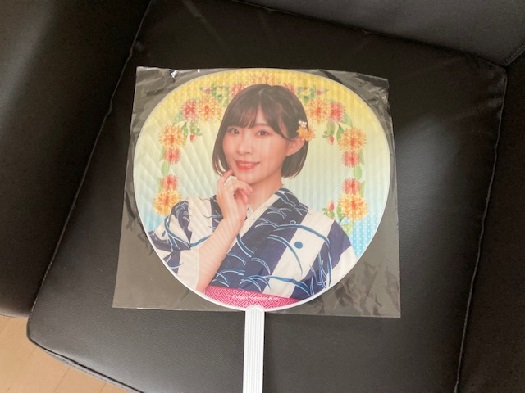 Speaking of the MC’s, she initially talked about being worried about holding the concert during the COVID emergency. She talked repeatedly about the color-coding the fans do for her singles, teaching the newer fans to watch the veterans to know what lightstick colors to use on which songs. She also noted how we weren’t allowed to do “calls” at the show, so it kinda bummed her out that we couldn’t do the “Wasamin” chant, or the last song ‘complaining’ (ehhh?!?!?!) or the “Sou desu ne!” bit. Ultimately she did them for us, LOL! At one point she started talking about Sadogashima, asking if the fans would be interested in trying to have another event there. You might remember our adventure a few years ago when Wasamin and her fans went to Sado Island, only to have most of the event cancelled due to an impending typhoon. I would definitely go if she did that again. I think most of the fans felt the same way. 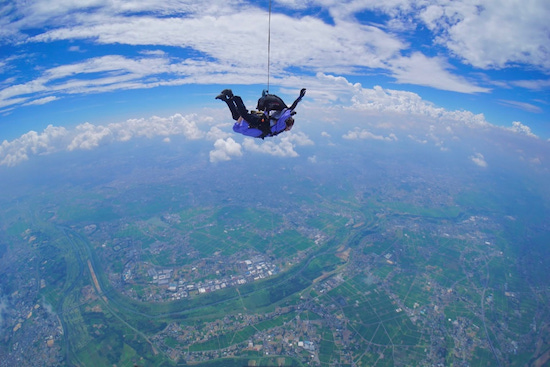 There were two VTRs, one for the costume change and the other for the encore. The first was a cute dokkiri where she thought they were taking her bungee jumping, and instead took her skydiving. Wasamin wasn’t nervous at all, she was totally up for it. So we got to watch her first ever dive! BTW, after that VTR she was asking the audience who had gone skydiving before, and NOBODY raised their hand! She was trying to enroll all of us into trying it, but considering the general demo of her fanbase I doubt anyone is gonna try it. The second was an retrospective interview where she reminisced about her debut, and the last ten years.

As for the songs, over 2/3 of the setlists were songs she has performed before. She sang all of her singles, and a bunch of c/w songs from her releases. There were a few new songs in there. I really liked Mugon-zaka, which she sang in the first show. I also really liked the Sekai de Ichiban Atsui Natsu, although Wasamin got a little off beat in the beginning and had to catch up. The Matsudo Seiko song she ended the main set with was really grand, a great show-ender. But the song that had everyone talking was Imitation Gold. It was definitely a new style for her. Very sexy, and very cool! On the other hand, Neko was a bit beyond her range, she really struggled to hit the low notes on the verse. It’s a guy’s song after all though.

As most of us were expecting, she sang her brand new single Akira as part of the encore. After two listens, here are my impressions. The song has somewhat of an exotic/mysterious feel, which is cool, and it fits her singing style perfectly. She sang it really well. On the other hand, it sounds like some of the other songs she sings, and it’s missing an identifiable hook. The chorus portion of the song is really short. So perhaps it isn’t among my favorite of her singles, but it may grow on me the same way Migi/Hidari did. I didn’t really like that one at first, but now I do. 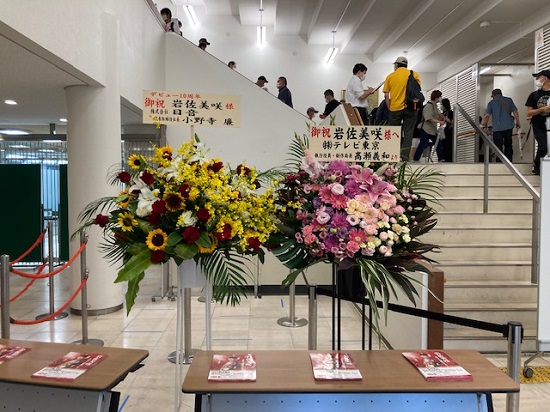 At the end of the day it was really nice to see a Wasamin solo concert for the first time in over two years. I hope they release a DVD/Bluray since it was an excellent performance. The concert, including bonus VTRs and backstage footage, will be available to stream later this month. You can purchase access from Eplus. Check out Wasamin’s recent blog post for info and a purchase link.
https://ameblo.jp/wasaminnn/entry-12692061647.html

After the show some of the fans seemed to be waiting outside for something, but it was raining, the trains were all running late, and I had a bit of a journey get home. It wasn’t like we could really have any sort of post-show izakaya party anyway. I’m not sure when we will get another live event, although she has a couple virtual lives coming up, including her release day mini-live. Hopefully something cool will pop up soon.